Elysse Perry was the undisputed star of the game, picking up three wickets in one before making 49 off 47 balls in Australia's chase.

Australian all-rounder Ellyse Perry emerged as the undisputed star of the day as she anchored a tricky chase with a brilliant knock of 49 (47 balls) to guide the hosts to a four-wicket win versus India in the third match of T20I tri-series on Sunday. Perry also picked up a four-wicket haul earlier to restrict India to 103/9.

Chasing a low target of 104 to win, Australian batswomen struggled to rotate the strike against India’s slow ball bowlers – Deepti Sharma, Radha Yadav and Rajeshwari Gayakwad. The dangerous Alyssa Healy was dismissed by Shikha Pandey for just 1 in the second over while Deepti had the other opener Beth Mooney stumped for 6 in the fifth over. Gayakwad then removed Ashleigh Gardner (22) just two balls later.

Unflinched with the fall of regular wickets, Perry played her natural game and kept the scoreboard ticking with her measured approach. With not enough runs to defend, India bowlers applied breaks on Australia’s scoring and put up a valiant effort but failed to close out the match.

The 29-year-old Perry shared small but important stands with Rachel Haynes and Jess Jonassen, doing the bulk of the scoring. Her 49-run knock included eight boundaries. By the time, she succumbed to Radha Yadav in the 18th over, Australia needed just five more runs.

Turning the match on its head! Ellyse Perry with a three-wicket over to run through India’s middle order! ⭐@Commbank | #AUSvIND pic.twitter.com/ppMfVjlNF4

India had beaten England in the tournament opener while Australia had lost to England in a Super Over finish on Saturday, leaving all three teams with a win each.

“Our lower order definitely needs to bat a lot better, especially when the top-order doesn’t get runs. However, really appreciate the performance of the bowlers,” said India skipper Harmanpreet Kaur at the post-match presentation.

India will next take on England at the Junction Oval in Melbourne on February 7.

Sixteen-year-old Shafali Verma touted as the next big thing in women’s cricket, lasted only three balls while Jemimah Rodrigues crawled to 1 off 11 balls, leaving their team at 16 for two in three overs.

The tri-series is an important preparatory event ahead of the T20 World Cup beginning in Australia on February 21. 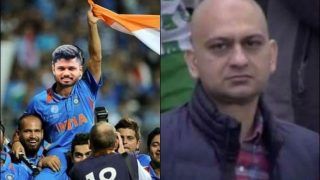