In their final leg of Bangladesh tour, Windies find find themselves levelled at 1-1 in a three-match T20I series and a chance to return home with a silverware.

It’s been three months since West Indies embarked on their tour of the subcontinent. Their first phase saw them being hammered across formats in India and things haven’t changed as they moved eastwards to Bangladesh. They were clean swept in a two-Test series, gave a tough fight in following ODI series before losing it 1-2 and now find themselves, again, within a chance to win a silverware.

Windies pacers benefited from the mistake of Bangladeshi batsmen who succumbed against short-pitched deliveries. However, they learned from their mistakes in a vastly improved performance, as they posted 200-plus target before the bowlers defended it successfully.

In both the matches, Shakib Al Hasan was the standout performer both with the bat and the ball. And Bangladesh will be banking on their captain to extend his excellent form in the series decider Shere Bangla National Stadium where both the teams will encounter similar conditions as that of the previous encounter.

West Indies need more support from their top-order with Shai Hope and Rovman Powell being their top performers so far. Consistency is the keyword for both the sides and the nature of two contrasting performances from the two opponents has set the stage perfectly for a tasty finale with the series locked at 1-1.

Weather: Clear and sunny with a high of 26 degrees

Where to watch: Star Sports Network

No news of any fitness concerns. Shakib will not be willing to tinker with the winning combination.

Despite inconsistencies at the top, Windies are also not expected to ring in changes.

“If you want to win a T20 game you need to keep the momentum going, be it with the ball or bat. Luckily we got the momentum early and we continued with it to post in excess of 200 on that wicket,” – Shakib Al Hasan

“We had an off day on the field today, but we did well in the last game. So we would like to bring our A game next time around and win the series 2-1” – Carlos Brathwaite 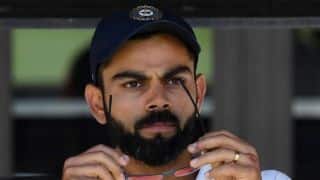