Pakistan‘s Yasir Shah dismissed three New Zealand batsmen to come within two wickets of becoming the fastest man to 200 wickets in Test cricket on day one of the third and final Test in Abu Dhabi on Monday.

The legspinner trapped opener Jeet Raval on 45, bowled Ross Taylor for nought with his next ball and then Henry Nicholls for one before New Zealand reached 73/4 at lunch at Sheikh Zayed Stadium.

At the break Kane Williamson was unbeaten on 21 and with him Bradley-John Watling was not out on nought as they try to repair the damage after winning a crucial toss on a grass-less pitch.

There is all to play for as the series is level at 1-1, after New Zealand won the first Test by four runs in Abu Dhabi and Pakistan bounced back with an innings and 16 runs victory in Dubai.

New Zealand were cruising along nicely when Yasir started his demolition act in his seventh over, trapping Raval leg before with a faster one.

With his next ball, Yasir clean-bowled Taylor as the batsman went back but completely missed the ball. In his next over Yasir dismissed Nicholls who played on to his stumps.

Yasir, whose 14 wickets helped Pakistan level the series in Dubai, has figures of 3-12.

It was teenage left-arm paceman Shaheen Shah Afridi who gave Pakistan their initial breakthrough, trapping opener Tom Latham leg before for four on debut for his first Test wicket.

New Zealand, who won the first Test by four runs in Abu Dhabi, brought in fast bowler Tim Southee and off-spinner Will Somerville in place of Neil Wagner and Ish Sodhi.

Shaheen, 18, made his Test debut as a replacement for injured medium pacer Mohammad Abbas. 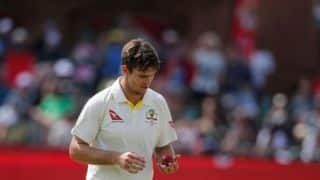 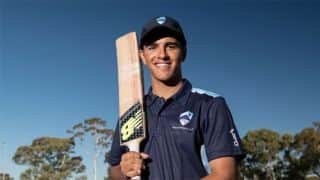