South Africa were reduced to 9/2 before bad light stopped play on the second day of the third Test.

India, having declared their first innings at 497/9, scalped two quick South African wickets, reducing the visitors to 9/2 before bad light stopped play on the second day of the third Test at the JSCA International Stadium Complex in Ranchi.

Earlier, Rohit Sharma and Ajinkya Rahane, who resumed on their overnight score of 117 and 83, continued from where they had left on the first day of the third Test. While Rahane went on to bring up his first Test ton in India since 2016 before being dismissed for 115 by George Linde.

Rohit, meanwhile, went on to complete his first double hundred in the Test cricket as he became only the second Indian cricketer after Virender Sehwag to score 500 or more runs in the three-match series to continue India’s dominance.

While Rohit fell for 212, Ravindra Jadeja Jadeja and Wriddhiman Saha consolidated India s position with the South African bowlers doing much better in this session picking up five wickets.

For South Africa, George Linde was the pick of the bowlers with four for 133 in his 31 overs. Rabada pocketed three for 85 in his 23 overs that included seven maidens. 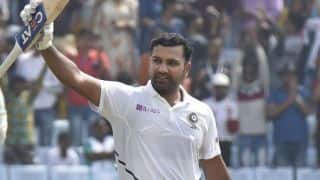