With the series already out of their grasp, a bruised and battered India will be hoping to redeem some pride and avoid a humiliating whitewash when they take on a rampant England in the fourth and final cricket Test starting on Thursday at The Oval. 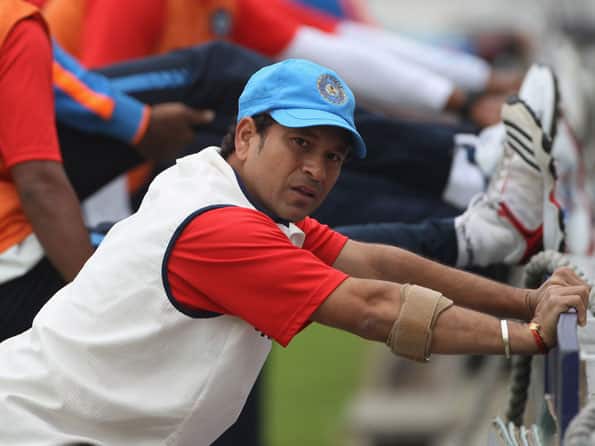 All eyes will be on Sachin Tendulkar, who will probably play his last Test match in England Getty Images

With the series already out of their grasp, a bruised and battered India will be hoping to redeem some pride and avoid a humiliating whitewash when they take on a rampant England in the fourth and final cricket Test starting on Thursday at The Oval.

Coming into the series as world’s numero uno Test team, India’s reputation took a huge beating after England crushed the visitors by huge margins in the first three Tests to snatch away the number one position from them.

And for the Indians, already under severe criticism for their shoddy performance in the series so far, another defeat means they will slip further to the number three position in the Test rankings behind South Africa.

But Mahendra Singh Dhoni, who suffered his first series loss as India captain, will be desperate for a turnover of fortunes as a win in the Oval Test will not only save the visitors from the ignominy of a series whitewash but also give them the required impetus before the five-match ODI series.

The good news, however, for India is that the final Test of the series will be played at The Oval, a venue known for high scores and also a ground where the visitors boast of a good record.

Going by records, the Indians over the years have lost just two out of 10 matches at this ground. The Oval is also the ground where the Ajit Wadekar-led Indian team created history in 1971 by registering the nation’s first series win on English soil.

The Oval is also the venue where Sachin Tendulkar played his 100th Test. And if further comfort is required, the Indians can take heart from the fact that England could miss the services of its pace spearhead James Anderson in the match as he suffering from stiffness.

However, going into the match Dhoni’s main concern would be the form of his famed batting line-up, which has failed to reach the 300-run mark in the six innings of the series so far.

What cost India dearly is starts from their opening pair.

Both Gautam Gambhir and Virender Sehwag, who played in the Edgbaston Test after missing out the first two matches due to injury, struggled miserably against the moving ball upfront.

While Gambhir got some sort of a start in one or two innings, Sehwag made a King’s pair at Edgbaston.

The ever-reliable Rahul Dravid is the only Indian batsmen to have shown some grit against the lethal English attack. He has so far scored two centuries in the series.

In contrast, Sachin Tendulkar is yet to find his mojo and is still looking for his first ton in the series to reach the magical figure of 100 international centuries.

India’s crisis man VVS Laxman is also struggling in the English conditions and young Suresh Raina’s place is under threat from Virat Kohli after making just 105 runs in six innings.

On the bowling front, the series has so far been a nightmare. In the absence of an injury-prone Zaheer Khan and out-of-form Harbhajan Singh, the Ishant Sharma-led Indian attack looked ordinary.

Paceman Praveen Kumar, who suffered a finger injury in the last match, is a doubtful starter for the game and the team management is likely to wait till tomorrow before taking a final call on him.

While their English counterparts were menacing in the seam-friendly conditions in the first three matches, the Indian bowlers lacked penetration and wicket-taking ability.

India’s bowling woes can be gauged from the fact that they allowed England to score over 700 runs in the first innings at Edgbaston.

England, on the other hand, have been clinical in all departments of the game — be it batting, bowling for fielding.

Heading into the Edgbaston Test, the performances of their openers in the first two matches was the only concern but it has been addressed last week with Alastair Cook stucking a career-best 294 and captain Andrew Strauss returning to form with a patient 87.

The home team’s middle-order is in awesome form with Kevin Pietersen, Ian Bell, Eoin Morgan and Matt Prior all scoring centuries in the series.

England’s tailenders are not to be left behind as Tim Bresnan and Stuart Broad came up with impressive performances with the bat in this series to make their lower-order one of most capable in the world so far.

Barring Anderson’s fitness, England has no major concern going into the Oval Test.

Even if Anderson, who has scalped 22 wickets from six Tests at this venue, doesn’t play England have Bresnan, Broad, Steve Finn and Graham Onions, who was brought in the side in injured Chris Tremlett’s place, to look upto.

In Tremlett’s absence, the only question Strauss faces is whether to play Finn or Onions.

To add to India’s misery, off-spinner Graeme Swann has been impressive at this venue with 15 scalps from two Tests.

As far as weather is concerned, rain is expected on the first day while the rest of the days should witness a decent weather. (PTI)