The fifth and final Test between England and India is likely to go ahead as per schedule starting tomorrow with all the Indian players testing negative for fresh RT-PCR Covid tests. New Delhi: The fifth and final Test between England and India is likely to go ahead as per schedule starting tomorrow with all the Indian players testing negative for fresh RT-PCR Covid tests. Amid growing concerns of the final Test to be called off after another COVID-19 positive case emerging from the Indian camp on the ongoing England tour, BCCI secretary Jay Shah was of the view that the Indian team should play the Manchester Test after all the test results of the players came back negative, according to a Times of India report.

As per reports, the fresh RT-PCR tests were conducted around 5:30 pm UK time which is 10 pm IST, With the series nicely poised at the moment, the final Test has the making of a great spectacle. India are currently leading the series 2-1 after convincingly winning the Oval Test.

The ECB say that all the India players PCR Covid Tests have come back negative & the Old Trafford Test goes ahead as planned. #bbccricket #ENGVIND pic.twitter.com/7Flqw6BT63

Earlier, BCCI President Sourav Ganguly has cast doubts over the fifth Test going ahead as the India cricket team’s junior physio Yogesh Parmar tested positive for COVID-19 that led to the visitors cancelling the practice session on Thursday morning.

“We don’t know if the match will happen at the moment. Hopefully, we can get some game,” said Ganguly at the book launch of ‘Mission Domination’ in Kolkata.

It is to be noted that with Parmar testing positive for Covid, India are left without a physio as the main physio Nitin Patel is already in isolation after head coach Ravi Shastri and bowling coach Bharat Arun contracted the virus during the Oval Test. 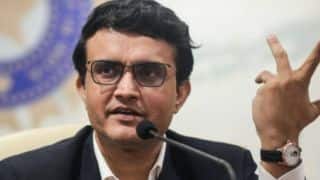