India after losing the Test series against South Africa by 2-1 dominated in the ODI series winning it 5-1 and won the T20I series 2-1.

India after losing the Test series against South Africa by 2-1, dominated the ODI series and T20Is. Shikar Dhawan had experienced the selectors axe during Test match series, when he failed to perform in one game. However, he was back in the limited over format and scored some valuable runs but failed to convert most starts into big centuries. Sunil Gavaskar in his column for Times Of India believes that Dhawan would have to score big in order to stay in the team.

“Why Dhawan, why not Rohit Sharma? After all Rohit played more matches than Dhawan in South Africa. Not for a moment it is being advocated that Sharma should be dropped but it s only to bring out that when the axe is to be wielded then Dhawan invariably tops the list.

That s why the left-hander has to realise that getting brilliant 70s and 80s is not going to save his place. Only hundreds will and so like Virat Kohli hardly plays a lofted shot even in limited overs cricket and gets to 100s”

Dhawan with his aggressive batting gives the team a good start by taking risk early on in the innings. He seems to be fearless and plays the ball on the up. Gavaskar feels he should eliminate lofted shots. “Dhawan also has to ensure he eliminates the risky lofted shots and gets hundreds. His scoring rate is tremendous anyway so that will not drop down but his centuries will increase and the usual call to leave him out will decrease.”

Team India would be touring Sri Lanka to play T20I tri-series starting from March 6. Senior players in the team have been rested making way for young talent. Rohit will lead the team in absence of Virat Kohli and Dhawan is named the vice-captain. Gavaskar believes this would be a good platform for youngsters and even for Suresh Raina and Dinesh Karthik to prove their worth.

“It is a wonderful opportunity for youngsters like Mohammad Shiraz, Rishab Pant, Deepak Hooda to serve notice of their talent and temperament, and for senior pros like (Suresh) Raina and (Dinesh) Karthik to show that their selection is justified.”

India will play the opening match of the series against the host on March 6. 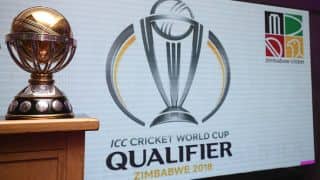