A round up of the Elite B matches in round eight of the 2017-18 Vijay Hazare Trophy.

Uttar Pradesh defeated Madhya Pradesh by five wickets, thanks to a collaborative batting effort by its batsmen who helped chase down the 277-run target in Round 8 of the Elite Group B match at the Feroz Shah Kotla in New Delhi on Sunday. Electing to field, UP struggled to stem the flow of runs from Venkatesh Iyer, who top scored with 83 runs. After losing opener Rajat Patidar for nine, MP s middle order chipped in with useful runs to take their side to 277/7 after 50 overs. Yash Dubey scored 66, while Naman Ojha notched 53. For UP, experienced leg-spinner Amit Mishra and Shiva Singh claimed two wickets each.

In reply, Uttar Pradesh arrived at their target with three balls to spare. A cumulative batting effort by Upendra Yadav (45), Samarth Singh (70), skipper Aksh Deep Nath (51) and Priyam Garg (50*) saw UP to chase down the target with hardly any hiccups. For MP, Saransh Jain picked three wickets.

At the Airforce ground in Palam, Andhra beat Saurashtra by six wickets. Opting to bat Saurashtra ended their first innings at 214-7. AV Vasavada top scored with 55. Girinath Reddy (2/44) and Karn Sharma (2/48) were the pick of the Andhra bowlers. In reply, Andhra cruised to their target, thanks to Prashanth Kumar s 83-ball 71.

At the other ground in Palam, Hyderabad beat Chhatisgarh by 101 runs. Opting to field, Hyderabad finished their innings at 222-9. Rohit Rayudu s 75 was instrumental to ensure his side were able to pose a decent target. Pankaj Rao snapped three wickets for Chhatisgrah. In reply, Chhatisgarh were bowled out for 121. Mehdi Hasan and Saketh picked three wickets each to create havoc for the opposition batsmen. 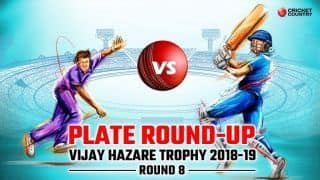