Kevin Sharp, Joe Root's mentor, believes Joe Sharp has the potential to be England's next Root.

These men are no average Joes. These Joes are meant to average high in cricket. Joe Root has been England’s best batsman since Kevin Pietersen and may end as one of their greatest. England have another Joe climbing up the ranks and he is touted to be the next Root. According to Root’s batting mentor, Worcestershire’s Joe Clarke could be the new Root.

Kevin Sharp has played many seasons for Yorkshire and then as a coach, played a big hand in Root’s development as a batsman. Now the head coach of Worcestershire, Sharp believes the 21-year-old Clarke could go the England captain’s way as he shares similar attributes.

“Yes, he could be the new Joe Root,” Sharp told ESPNcricinfo. “He reminds me a lot of Joe Root’s credentials. I met Joe Root as a 12-year-old and he had something special straight away. I knew that from day one. The way he went about his tasks, the way he talked about the game and the way he went about planning: he was always planning for the next level.

“Joe Clarke’s the same. He’s a fine young player. He wants to play all types of cricket for England. He’s very self-driven. A few years ago I told Joe Root to look out for a guy called Joe Clarke. He said ‘All right. OK then.”

Young Clarke is Root’s fan. From 47 First-Class matches, Clarke averages 41.43 and has slammed 9 hundreds. He is still finding his foot in limited-overs where he averages 33 at a strike rate of 90. He can surely tonk it hard. His T20 strike rate reads 152.

He was a part of England’s Lion’s side for their tour of West Indies. Clarke flopped in the First-Class games, scoring 116 runs at 19.33 but came to his own in the List A matches in North-South series, where he piled up 229 runs at 76.33 and the runs came at a strike rate of 114.

England’s batting has been brittle and the void left by Pietersen, Jonathan Trott and Ian Bell are still to be filled. It would not be a surprise if England push Clarke to a berth.

“It wouldn’t surprise me if he was picked,” Sharp said. “He would do well. He believes in himself, he’s hungry and he concentrates well. It absolutely wouldn’t be a problem if he got picked. He wouldn’t let himself or anybody down.” 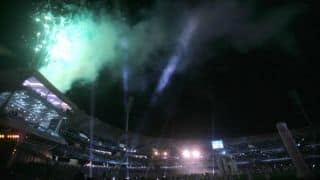