CSK vs MI, IPL 2021: Aakash Chopra said that he may get trolled if his prediction does not come true.

Dubai: Hours ahead of the start of the second phase of the Indian Premier League on Sunday, former India cricketer Aakash Chopra has predicted the team that will win the opening match of the UAE leg. As per Chopra, defending champions Mumbai Indians will beat Chennai Super Kings in the mega-clash on September 19 in Dubai. He added that he may get trolled if his prediction does not come true, but he opts to still stick his neck out over his prediction.

In a video shared on his YouTube channel, Aakash Chopra opined that the Rohit Sharma-led side will start on a winning note. He said: “I am putting my neck on the block, you can make the memes. I am going with Mumbai Indians to win.”

In the first phase, the two sides met in the season opener where MI beat CSK by four wickets. Also, MI have a better head-to-head record over their nemesis.

He also reckoned that the finger spinners will reap more rewards than the wrist spinners. He predicted Piyush Chawla and Imran Tahir may both play, but felt Ravindra Jadeja and Moeen Ali would be the ones doing better at the venue. “Finger fingers to pick more wickets than wrist spinners. You might see Tahir and Chawla play, Rahul Chahar will surely play. But Moeen Ali and Jaddu will do a fairly good job on this big ground. They will be taking more wickets,” he added.

CSK are second on the points table with five wins from seven matches 10 points MI are fourth with four wins eight points from seven games. 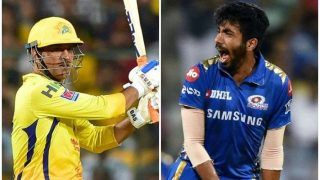 Should Ravindra Jadeja Bat Ahead of MS Dhoni For CSK? Sanjay Manjrekar Makes Big Comment Ahead of IPL 2021 UAE Opener