Sohail said that unfortunately the coordination which is required to develop players was missing between players, selectors and management.

Former Pakistan opener Aamer Sohail came down heavily on the Inzamam-ul-Haq-led selection committee for picking sloggers instead of consistent finishers in the national team ahead of the World Cup.

“The main concern for me is that our players are not playing as per demands of contemporary cricket where teams are reaching close to 350 without taking too many risks and playing percentage strokes,” said Sohail, a member of Pakistan’s 1992 World Cup winning team.

“Our problem is that this selection committee which has been around for a while now still can’t figure out how Pakistan can score 300 plus and for that what do we have to do.

“The unfortunate part is that in Pakistan we look for sloggers. We think sloggers will finish the game. That is not right we need to select and than develop players who can play percentage cricket and finish the job at least seven out of 10 innings.”

Sohail, who led Pakistan in six Tests and 22 ODIs, said unfortunately the coordination which is required to develop players was missing between players, selectors and management.

He noted that in England in recent years there have been many scores of over 300 runs in one-day internationals and that is how teams like India, England and New Zealand are doing so well in this format.

Sohail, who appeared in 47 Tests and 156 ODIs, pointed out that most teams now have two or three players capable of reaching strike rates of 100 plus and they were not sloggers but played good cricket.

Sohail said what worried him was that there were some batsmen in the Pakistan team whose strike rate was at best run-a-ball or less.

“In contemporary cricket if you are looking to make 300 to 325 and you have two or three players in your line-up who get fifties or hundreds on more balls than that is a problem,” he said.

Sohail also felt that with cricket changing its nature and character, it was important for a team to fully exploit the first 10 over power play and in mid of the innings.

He noted that when Pakistan won the 1992 World Cup the demands of the sport were different as they were in 1999 (when Pakistan reached the final) or in 2003.

“In the last World Cup the bar was raised as far as scoring runs is concerned. Some teams totally changed their approach. We have a good bowling line-up, respectable spinners but in a single league format you need to get big totals more regularly,” he said.

“I am banking that in English conditions in June and July, there could be more dry pitches and that could help the bowlers.”

“Sarfaraz is ideally suited for six or seven and he has got runs at that position so why disturb him from his comfort zone.”

“I have seen Ahsan bat and his percentage of boundaries is very high. He is a very calculated player and has percentage shots. I see lot of spark in him and he somehow appeals to me,” he said.

“We should take him to England and try him out in the one-day series and side matches and if he does well he should be given his chance in the World Cup.” 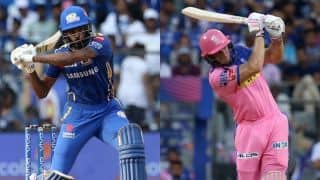