Before today, Aaron Finch held the world record for the highest T20 International score 156 against England at Southampton in 2013. He went past his own record today, hammering Zimbabwe for 229 in 76 balls in the third match of the T20 tri-series, at Harare Sports Club. Finch smashed 16 fours and 10 sixes, adding a world-record T20I stand for any wicket with D’Arcy Short, who took 42 balls for his 46.

As mentioned, Finch holds the world record for the two highest scores in T20I history. In fact, four of the top five scores are by Australians, as is evident from the list below.

Finch also came within striking distance of the highest score in any T20 match. He fell one boundary short of Chris Gayle’s world record of 175 not out, scored for Royal Challengers Bangalore (RCB) against Pune Warriors India (PWI) at Bengaluru, back in IPL 2013. Finch was leading PWI that day. The third name on the list is of Hamilton Masakadza, who, coincidentally, is leading Zimbabwe today. 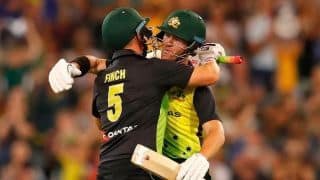