Australia are second and England fifth in ICC T20I rankings.

Aaron Finch is optimistic there will be no lingering effects from Australia‘s ODI whitewash when they conclude a limited-overs tour with a lone Twenty20 International fixture against England at Edgbaston on Wednesday. Finch was involved as England completed their first 5-0 sweep of Australia in any format in more than 140 years of men’s cricket between the arch-rivals with a dramatic 1-wicket win in the fifth ODI, at Old Trafford on Sunday.

Tim Paine was the Australia captain for that series, but Finch, Australia’s T20I skipper, hopes the influx of a fresh group of players will enable the tourists to head into Wednesday’s match at Edgbaston with “no baggage”: “We had a debrief and … we’ve put a bit of that stuff to bed … As a T20 team not a lot needs to be said. We have new faces to bring fresh energy, guys that have no baggage. It’s a great opportunity to get out there and strut our stuff in a format we have had success in.”

Five-times World Cup winners Australia, the reigning champions, have lost 16 of their last 18 completed ODIs. They are now a lowly sixth in the ODI rankings, their worst position in 34 years, with England top of the standings. But when it comes to T20Is, Australia are second and England fifth.

“In the one-day format the confidence was definitely affected,” Finch said. “England put us on the back foot from the word go, and we weren’t able to catch up. But we’ve had success in this format, from seventh in the world to first or second — which is a great achievement.”

Finch is the official vice-captain to Paine in the ODI side. Paine was also thrust into the role of Test captain in the fall-out from the extraordinary ball-tampering scandal in Cape Town in March that saw former skipper Steven Smith and David Warner, his deputy, both given year-long bans by Cricket Australia. Paine was not at his best with either the gloves or the bat during the recent hammering. There are those suggesting Finch could be the man to lead Australia at the 2019 World Cup in England.

But Finch had little time for the idea that Wednesday’s match and a subsequent scheduled tri-series against Zimbabwe and top-ranked Pakistan will also serve as an audition for the role of ODI captain: “I don’t think so. If the opportunity came up it would be an honour. But it’s not something I have thought about. Tim is the captain right now and did a great job throughout the series. “It was disappointing we didn’t back up his leadership with our performances — we let ourselves slip.” 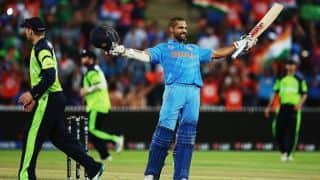