Aaron Finch scored a 27-ball half-century, getting his team off to a great start in their chase of 185 in the second T20I between India and Australia at the MCG.

Aaron Finch scored a 27-ball half-century, getting his team off to a great start in their chase of 185 in the second T20 International (T20I) between India and Australia at the Melbourne Cricket Ground (MCG) on Friday. Finch and his opening partner for this match Shaun Marsh took India’s bowling to task with a rapid partnership. Marsh, playing after David Warner was rested, played second-fiddle to a rampaging Finch. Ashish Nehra and Jasprit Bumrah started things off for India, but neither bowler found the right line or length on a pitch that had little for the bowlers. Finch, captaining Australia, batted well right from the first over. Live Cricket Scorecard: India vs Australia 2015-16, 2nd T20I at Melbourne

Earlier, Australia won the toss and put India in to bat. Rohit Sharma scored 60, Virat Kohli made 59 not out, and Shikhar Dhawan scored 42 to give India an excellent platform. MS Dhoni played a couple of good shots but was dismissed in the final over of the innings. Live Cricket Blog: India vs Australia 2015-16, 2nd T20I at Melbourne

Scott Boland and Andrew Tye — two of Australia’s three debutants — started off well with economical first overs, Boland giving just one run, and Tye giving five. However, the third debutant, Nathan Lyon, had a nightmarish debut by giving 15 runs in the only over he bowled. Australia made six changes to their line-up from the one that lost the opening T20I at Adelaide to India. India had gone in with the same side that won at Adelaide. 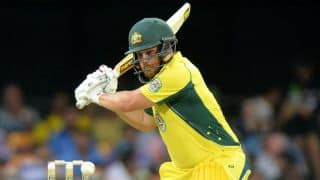 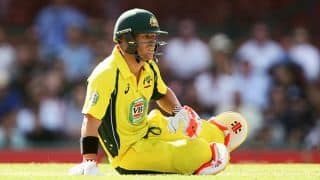