Aaron Finch brought up his third consecutive half-century in IPL 9 for Gujarat Lions guiding them to a 3-wicket victory over Mumbai Indians.

Gujarat Lions won their third consecutive match of Indian Premier League 2016, comfortably beating the defending champions Mumbai Indians by three-wickets. Openers Aaron Finch and Brendon McCullum got off to a great start making 11 runs in the first over. McCullum was the first GL wicket to go failing to an absolute jaffa from Jasprit Bumrah. McCullum got out to making just 6 runs, skipper Suresh Raina was next in to bat, tried to construct partnership with Finch, who was looking dangerous. Both Raina and Finch added 53 runs for the second wicket, before the former fell to Mitchell McClenaghan. LIVE CRICKET SCORECARD: Mumbai Indians vs Gujarat Lions, Match 9, IPL 2016

McClenaghan picked up Raina wicket for 27 runs, who was trying to pull giving a catch to keeper Parthiv Patel. Dwayne Bravo was next to go, he was unlikely to be given out as the replay suggested that the ball had missed the edge. This was Bumrah’s second wicket. Finch since the fall of Bravo’s wicket opened up his arms and went on destruction mode. Finch also brought up his third successive half-century. Akshdeep Nath did provide much relief hitting 12 runs off 11 balls.

Nath was cleaned up McClenaghan, who gave a simple catch to Hardik Pandya. Finch continued his merry ways bringing up his fifty in just , James Faulkner did provide some fiery moments with the bat, ended up giving McClenaghan his third wicket. Faulkner made only 7 runs to the total. With this wicket MI came crawling back in the match, next wicket to go was Praveen Kumar, who went for a duck in the same over. McClenaghan gave up just 2 runs in his final over picking up 2 wickets, which was also the penultimate over of the innings.

Final over 11 needed off 6. Bumrah to Finch. TWO, low full toss, Finch heaves it to deep mid-wicket, brilliant stop in the deep, certainly saved 2 runs for his team. Single as Bumrah bowls a perfect yorker, Finch tries to play scoop but fails to clear fine leg. Kulkarni drives the third ball over covers it over cover, one bounce into the fence. 4 runs needed off 3 balls . Another single as Finch comes on the strike. Two runs as a low full-toss gives GL easy chance to win.1 run needed off 1ball. Bumrah bowls a short ball to Finch he hits the ball past mid-wicket for a four and a memorable victory.

Earlier in the game , GL captain Suresh Raina won the toss and elected to bowl first, having made only one change to the team, with MI also making one change. Raina brought in Dhaval Kulkarni for Ravindra Jadeja, while MI brought in Krunal for Jagadeesha Suchith. It was only Parthiv Patel, Tim Southee and Krunal Pandya who added much needed score to a faltering as MI innings as they reached 143 for 8 in their full quota of 20 overs. Patel scored 34 runs, with Southee scoring 25 runs with Krunal adding 20 unbeaten runs to the team’s total. 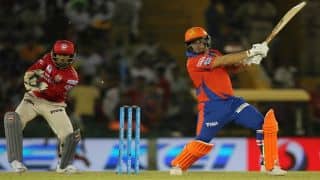