With this win, South Africa are tied with Australia on five points.

Aaron Finch’s heroics go in vain as South Africa beat Australia by 47 runs at Guyana and register their first win of the Tri-Nation Series 2016. Finch fought right till the end, but could not find good support at the other end. South Africa were clinical in their bowling performance, with everyone chipping in with wickets. Both South Africa and Australia are level on points as they have won their matches with a bonus point. South Africa will be happy to have gotten themselves off the mark in the series, after losing their first match against West Indies. All three teams now have a win and a loss under their belts. Full Cricket Scorecard: Australia vs South Africa, tri-nation series 206, Match 3 at Guyana

It was Wayne Parnell and Kagiso Rabada, who started things off well for South Africa as they managed to remove the top three batsmen for cheap scores. Australia had to deal with further blows as Glenn Maxwell and Mitchell Marsh too were removed in quick succession by debutant Tabraiz Shamsi and Imran Tahir respectively. Australia found themselves in deep trouble at 72 for 5 in the 17th over. Full Cricket Updates, AUS vs SA, Tri-Nation Series 2016

Finch meanwhile had gone past his fifty and was looking determined to see his side home. Things went from bad to worse for the Australians as the last recognised batsman Matthew Wade was caught behind off Rabada, who was brought back for his second spell. Rabada then got rid of Nathan Coulter-Nile for a duck with an excellent yorker and Imran Tahir followed it up with the wicket of Adam Zampa for a first-ball duck.

Rain had stopped play for a brief time. Nathan Lyon and Josh Hazlewood looked positive right at the end, but the runs required were too much and could not get the remaining runs.

The umpiring throughout the match, especially in the second innings has been below standards. Maxwell was clearly not out, but there were a couple of occasions, where it Finch was clearly out leg before, but the umpire turned it down.

Australian bowlers were exceptional once again as they managed to restrict South Africa to just 189. Josh Hazlewood and Nathan Coulter-Nile were excellent right from the beginning, picking up two wickets apiece. Nathan Lyon and Adam Zampa too continued their good form from their previous game. Maxwell too chipped in with a couple of wickets, including that of Farhaan Behardien, who top-scored for the Proteas with 62.

Earlier, South Africa had won the toss and elected to bat first. Both sides have made changes to their sides. Mitchell Starc was rested for this match and Coulter-Nile came in his place. For the Proteas, Morris made way for Shamsi and Kyle Abbott was replaced by Kagiso Rabada.

Man of the match: Farhaan Behardien 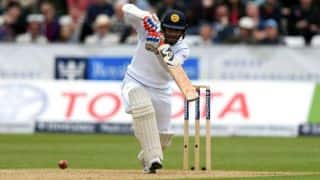