The Saurabh Netravalkar-led USA beat UAE by five wickets in the first one-dayer in Dubai.

Aaron Jones, Steven Taylor and Xavier Marshall starred as the United States of America (USA) beat United Arab Emirates (UAE) by five wickets in the first one-dayer at the ICC Academy Oval in Dubai on Monday.

USA, who had lost the T20I series after losing the second game following a no-result in the first game, registered their first win on this tour.

Electing to bat, UAE lost two wickets with 54 runs on the board. However, opener Rohan Mustafa and Rameez Shahzad joined hands to form a 55-run stand before the former was dismissed for 47 by Taylor. He then also got out Shahzad for 54.

Taylor, who bowls off-spin and bats in the top order, also removed two more batsmen from UAE s top four – Chirag Suri and Shaiman Anwar and returned with the figures of 4/38 in his ten overs.

USA did not really enjoy a solid start as they lost Monank Patel and Taylor with only 34 runs on the board. However, Marshall and Jones stitched a 52-run partnership before Imran Haider dismissed Marshall for 58.

Jaskaran Malhotra then joined hands with Jones as the two added 62 runs together. While Malhotra was run-out in the 39th over, Jones made sure he stayed till the end to help USA cross the finish line. The right-hander scored an unbeaten 81 off 107 balls as USA won the match by five wickets in hand and 2.3 over to spare. 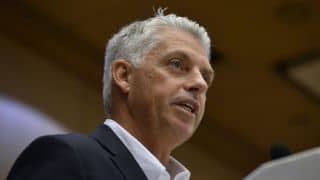 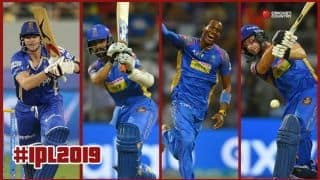