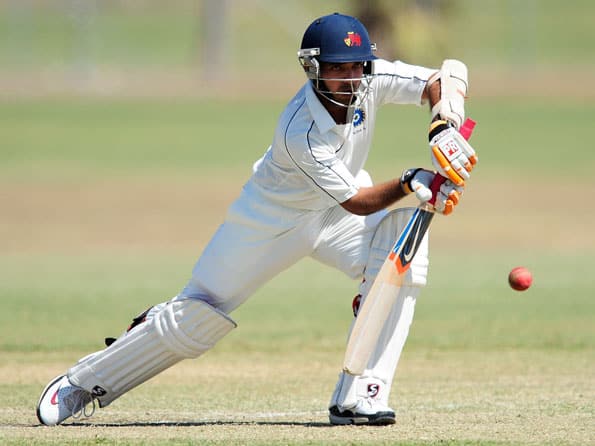 Ajinkya Rahane, who has played 48 first-class matches will be replacing injured Virender Sehwag in the ODI series Getty Images

“Mr. Virender Sehwag and Mr. Ishant Sharma have been ruled out of the forthcoming ODI series against England,” the BCCI secretary N Srinivasan said in a statement.

Sehwag, who had joined the team midway through the Test series after recuperating from a shoulder surgery, now has an ear infection to deal with, while Ishant has suffered a ligament injury in his left ankle.

“Mr. Sehwag suffered from labyrinthithis of the left ear on 24 July 2011. Although his condition has improved, he continues to experience headaches. An ENT specialist, who was consulted on the same, has said that he will take two more weeks to recover completely,” BCCI statement read.

“Mr. Sehwag has made good progress since the surgery on his right shoulder. He will be continuing rehabilitation to build up his throwing and bowling fitness.”

Sehwag was seen massaging his troublesome right shoulder and seeking physio Ashish Kaushik’s attention on the field during the course of his 67-ball 33 in India’s second innings of the fourth and final Test at the Oval on Sunday. He made a king’s pair in the third Test at Edgbaston and contributed eighth and 33 in the ongoing match here.

Sehwag went under the surgeon’s knife after this year’s Indian Premier League ended in May. He was named as the 17th member of the squad to England with the word he would join the touring party “after a fortnight.”

On Ishant, the BCCI said that he “sustained a ligament injury in his left ankle during the Birmingham Test of the ongoing series. He has responded well to treatment, but will need to undergo a course of intensive rehabilitation and training to prevent recurrence of the pain in his left ankle”.

Rookie 23-year-old opener Ajinkya Rahane has been drafted into the squad to replace Sehwag, while Ishant’s place has been taken the 21-year-old Varun Aaron, who did well in the Emerging Players’ Tournament in Australia.

“The All-India Senior Selection Committee has named Ajinkya Rahane and Varun Aaron as the replacements of the two players in the team for the T20 International and ODI series.

Both players will join the squad at the earliest,” the BCCI said.

India is already without key players such as pace spearhead Zaheer Khan, off-spinner Harbhajan Singh and batsman Yuvraj Singh in what is turning out to be a disaster of a tour.

The one-off Twenty20 International will be played on August 31 and the first of five ODIs is scheduled on September 3.(PTI)