AB de Villers led South Africa to an innings and 120-run win over Zimbabwe in the first ever four-day Test.

AB de Villers led South Africa to an innings and 120-run win over Zimbabwe in the first ever four-day Test. The Port Elizabeth match was the first time AB played Tests with the pink ball. He was not a part of South Africa’s tour of Australia in 2016-17 where a pink-ball Test was played at Adelaide Oval. De Villiers gave a thumbs up to the fast-paced approach to the longer format.

I think it was quite nice. I found the batsmen were a little bit more positive. There were talks of declaring earlier than normal, I spoke to Gibbo (Gibson) last night and we started talking about declarations a lot earlier than normal. It encourages a lot more positive cricket, I enjoy that. I still enjoy five-day cricket but there is definitely an excitement to day-night Test cricket for four-days. It is positive, there is a lot happening, we all enjoyed it as well as the spectators.

It s like any other format. You have to adapt, find ways, game plans, structures and strategies to get through certain times of the Test match. It looks like the last hour is tough to bat and that is an area that guys have to be aware of. We took some learning from that, it is an area where you need to tighten up as a batsman but on the other side the bowler has an opportunity to expose the batting line-up. It s a mindset and awareness of knowing what times are a little bit better to bat on and which aren t. There is room for day-night Test cricket, we love playing it, de Villiers said after the Test.

Geared up for India

Though the Test lasted just five sessions, de Villiers believes the side take a lot out of this series ahead of their India challenge. The three-Test series starts next week at Cape Town.

We still take a lot out of it. I think our batters toiled really hard on a wicket that seamed around the entire innings. It sped up in the evening and we started losing wickets, so the guys will take learning from that. From a bowling point of view, it was nice to get them (Zimbabwe) to follow-on so the guys got a few overs under the belt, we bowled 70-odd overs consecutively which was good. Some of the guys got good results on wickets that you can t buy in the nets. All in all it was a good outing for us, we will go out there and work hard before the India series but I was happy with the two days.

The South African squad for the India series will be announced on Thursday. 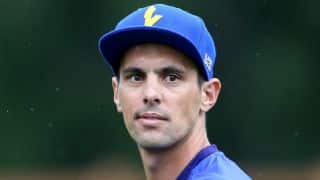 Anaru Kitchen: Getting a call-up for New Zealand is special to me and my family