Mandeep authored an unconquered 34-ball 54to help his side beat Rajasthan Royals by 71 runs in the IPL Eliminator.

Pune: Royal Challengers Bangalore (RCB) star batsman AB de Villiers on Wednesday announced he would gift his Man of the match award in the Indian Premier League (IPL) eliminator here to teammate Mandeep Singh for his performance in the game. Mandeep authored an unconquered 34-ball 54to help his side beat Rajasthan Royals by 71 runs in the IPL Eliminator at the Maharashtra Cricket Association (MCA) Stadium. READ: Virat Kohli lauds Mandeep Singh’s heroics

Reeling at 55 for 3 at one stage Mandeep and South African AB de Villiers put on a 113-run partnership to help their side post 180 for 4 at the end of 20 overs. “I haven’t performed that well in the last couple of innings. I have no idea how we got to 180.” AB de Villiers admitted his side was looking at 140 on the board. READ: RCB thrash RR by 71 runs in IPL 2015 Eliminator; to meet CSK in Qualifier 2

“The way Mandeep played was a Man of the match performance. The trophy will go to him after the presentation,” he said. Asked about the tough upcoming qualifier opposite Chennai Super Kings (CSK), he said: “CSK have won many tournaments and we know what we are up against”. 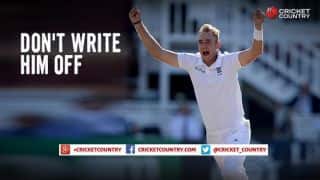