South Africa captain AB de Villiers has praised his side's attitude and hunger that led to their seven-wicket victory over England in the third ODI.

Johannesburg: South African skipper AB de Villiers has praised his side’s attitude and hunger that led to their seven-wicket victory in the third ODI of the five-match series against England at SuperSport Park in Centurion, Pretoria. Jubilant with the result, the 31-year-old insisted that it was a good solid performance by the team as they were desperate to get the result, Sport24 reported. De Villiers stressed that the team had shown a lot of energy on the field, adding that he hopes there were much more good stuff to come in future.   FULL CRICKET SCORECARD: South Africa vs England, 3rd ODI at Centurion

The skipper further showered praise on openers Quinton de Kock and Hashim Amla for their brilliant centuries. He said that their opening-partnership had provided a solid start to the game and made much easier for the batting line-up to understand the rhythm of the match.

De Villiers admitted that his side had gained a lot of confidence following their win, calling on his side to try to get same momentum in the remaining matches as well. Earlier, De Kock smashed sixteen boundaries and four sixes, as he made 135 off just 117 balls in his side’s chase of a daunting 319-run target. De Kock was well supported by Amla (127 off 130 balls) as the duo shared an opening stand of 239 runs to provide an initial thrust to the hosts.

South Africa, which are now 1-2 against England in the five-match series, will play their next match at the Wanderers Stadium in Johannesburg on Friday 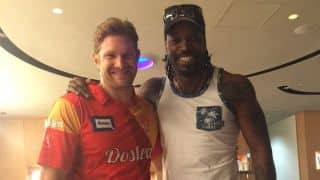 Chris Gayle, Shane Watson bury hatchet; as they prepare to play for RCB in IPL 9