AB de Villiers has announced his availability for the India Test series. However, will the South African selection panel consider ABD after his sabbatical?

Watching AB de Villiers bat is some sight for the cricket purists. From the high elbow to getting down on one knee and sweeping over fine-leg, ABD has variety of shots in his armoury. Be it any format, he is a delight to watch.

Things have not been the same for de Villiers since January 2016. Downed by injuries, there is uncertainty about his future in the longest format.

In Champions Trophy, South Africa stormed out in the group stages. De Villiers was yet again under the radar.

South Africa s bad luck continued. They lost the Tests, ODIs and T20Is against England. De Villiers chose to skip the Tests, and focus only on limited-overs format.

Ottis Gibson and a rejuvenated ABD

Amidst all this, South Africa were in desperate hunt of a new head coach, given Russell Domingo s tenure ending in August. Enters Ottis Gibson, England s former bowling coach.

And de Villiers shared a great bond with Gibson, even before the latter became the head coach. A chat with him gifted South Africa a rejuvenated de Villiers.

Faf du Plessis was named captain across formats when de Villiers relieved himself from ODI captaincy as well.

With the return of de Villiers in South Africa, one could witness a free-spirited animal unleashed on the opposition. Bangladesh were thrashed by the de Villiers mastery; he smashed his career-best score of 104-ball 176, guiding his side to 104-run victory.

When asked about his secret chat with Gibson and Faf as a captain, de Villiers told ESPNcricinfo, I needed a couple of months away with the family and then Ottis made contact. I had met him before he was announced coach and I knew he was a great guy. He wanted to know where I was headed with my career and I told him I wanted to get back in the side. I had a long run as a captain. I had some fantastic ups, and also quite a few lows in between. I just felt like it was enough. I wanted to enjoy the last few years of my career. I know what Faf is capable of as captain, and I think he’s going to become one of the best leaders we have had in this country. We’re going to give him all the support we can.

Under Gibson, de Villiers is sure the team is heading in the right direction, especially with 2019 World Cup round the corner. South Africa are already showing those signs with Quinton de Kock, Hashim Amla and de Villiers answering those calls.

Where others found it difficult to find boundaries, it was a piece of cake for de Villiers against Bangladesh. His first 50 runs took 34 balls, and then he went bonkers. You could have figured that out from his eventual score, I was still nervous. It took me an over or so to remember I had a good net in Kimberley and I am in good form. I had to remind myself that I am hitting the ball well. It was great to be out there with Hashim, he has a very calming influence. I am hitting the ball as well as ever. I just spent a bit of time out there and then some of the boundaries kept flowing, de Villiers recalled the innings.

Post the Bangladesh series, another challenge South Africa need to be up for is the India series. De Villiers, who has been out of action in Tests, opines it is not easy to find his way back in whites.

In his absence, JP Duminy resigned. Aiden Markram came and has almost sealed his place as an opener. De Kock and Temba Bavuma have been moved up the order, now that the No. 5 position is vacant. Dale Steyn, Morne Morkel, Vernon Philander have been struck by injuries adding to their woes.

De Villiers has announced his availability for the India Test series. However, will the South African selection panel consider ABD after his sabbatical? If selected, I will be there but I can’t accept that I am going to be in the squad. I have been out of the squad for a while and guys that have come in have done well. You don’t just walk into the Test team. I am going to have to work my way back. I am prepared to do the hard work. 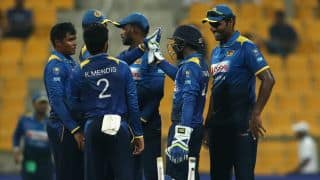