De Villiers has maintained that he does not want to give up the limited-overs captaincy as he believes he can lead the side to glory. He has also made it clear that he wants to be part of the World Cup 2019 squad in "one way or another."

South Africa s limited-overs skipper AB de Villiers is likely to retire from Test cricket by August this year, in order to prolong his limited-overs career, a report published in ESPNCricinfo has confirmed. As reported a couple of days ago, de Villiers is expected to meet Cricket South Africa (CSA) officials over this matter in August and unless the CSA can convince him to continue playing Tests, he is likely to hang up his whites. The report stated that de Villiers had made up his mind to give up the longest format late last year and had even informed CSA about the same, but was instead offered a year out of the game in a bid to get him to reconsider.

However, it is learnt that de Villiers is contemplating Test retirement and will convey the same to the CSA officials when he meets them following the appointment of a new coach in August. His move is aimed at playing white-ball cricket for South Africa until the 2019 World Cup, which he desperately wants to win for his country.

Before leaving the United Kingdom (UK) for a two-month break at home after the England ODIs, T20Is, as well as the ICC Champions Trophy 2017, de Villiers said CSA and he would “make a final decision about what happens for the next few years” when they meet in a few weeks’ time. Those close to de Villiers confirmed that the batsman wanted to retire from Test cricket after sustaining the elbow injury that kept him out of the New Zealand, Australia and Sri Lanka Tests last season.

In a column for The Independent, former South African skipper Graeme Smith added fuel to this speculation when he wrote: “It’s my belief that AB was looking to walk away from the Test game last year at some point, but has been encouraged to carry on by CSA. His personal prerogative is ensuring he does all he can to add as much longevity to his international career as possible, as well as taking in to account the harsh realities of touring such as the amount of travel involved, and the toll that takes on your body.

“…with the next ICC World Cup just two years away, it’s likely that he is targeting that tournament as a swansong to his already illustrious career at the top level.

De Villiers has maintained that he does not want to give up the limited-overs captaincy as he believes he can lead the side to glory. He has also made it clear that he wants to be part of the World Cup 2019 squad in “one way or another.” 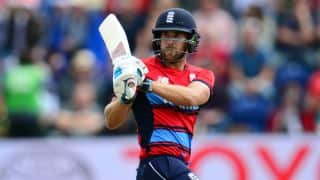