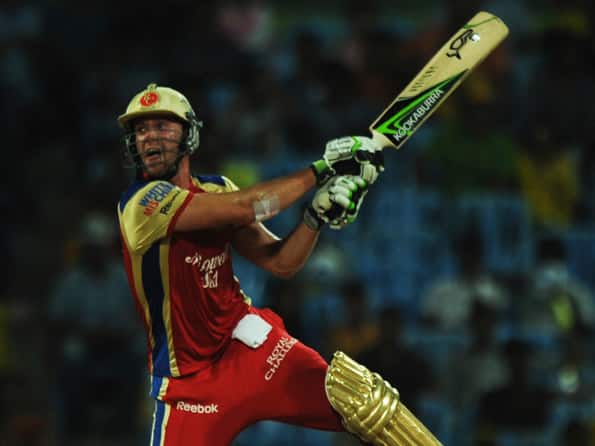 With this win, Bangalore moved up to the fifth position in the IPL Points Table.

de Villiers emerged as the game changer as he smashed five fours and three sixes to help RCB score 72 runs in the last 3.5 overs and overhaul Deccan’s target of 182 with seven balls to spare at the M Chinnaswamy stadium.

In the 18th over, de Villiers tore apart his countrymate Dale Steyn, smashing two sixes and as many fours to accumulate 23 runs. He then followed it up with two fours and a six in the first three balls of the penultimate over to take his team on the threshold of a much-needed victory.

Chasing 182 to win, Dilshan single-handedly led the runchase and forged a 91-run opening partnership with Chris Gayle (26) to set the foundation but the hosts slipped to 117 for 4 before de Villiers played a blinder to take RCB to the fifth position in the points table.

Opener Dhawan cracked 10 fours and one six in his 52-ball innings and forged 86 runs and 82 runs with Daniel Harris (47) and Cameron White (45) respectively.

Chasing the daunting total, Dilshan began with a flourish smashing Dhawan twice to the fence. In the next over, he fiercely pulled Steyn for a boundary.

Dilshan looked in an agressive form even as he exquisitley punched pacer Veer Pratap Singh between mid off and cover for a boundary in third over of RCB innings.

Running in hard in his second over, Steyn nearly had Chris Gayle when the ball missed the stumps as the West Indian batsman went for a big heave over long off.(PTI)