AB de Villiers blasted a quick-fire 97 as South Africa warmed up for next week's third Test against England at Lord's with a dominant start to their tour match at Derbyshire on Friday. 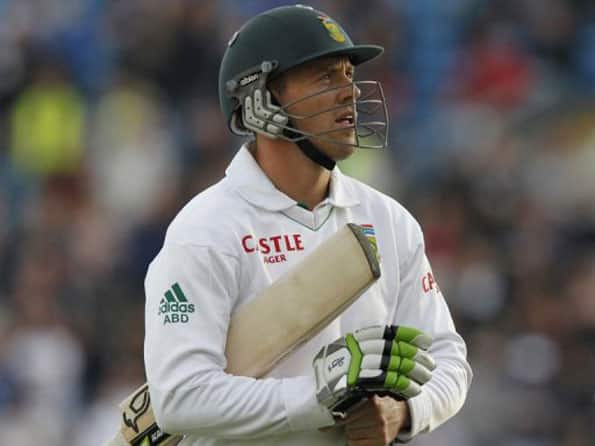 AB De Villiers smashed a quickfire 97 from just 96 balls, before retiring out AFP

AB de Villiers blasted a quick-fire 97 as South Africa warmed up for next week’s third Test against England at Lord’s with a dominant start to their tour match at Derbyshire on Friday.

De Villiers smashed his imperious innings of 97 from just 96 balls before retiring out and JP Duminy also got some good practice time with 69 before the tourists declared on 365 for four.

There was good news for South Africa off the field as well, ahead of the final Test of a series they lead 1-0, as captain Graeme Smith and Jacques Kallis were passed fit after injury scares in the second Test at Headingley and were included in a 15-man team.

Alviro Petersen is also expected to recover from a hamstring strain in time for Lord’s.

Smith’s declaration gave his bowlers 90 minutes before the close and Vernon Philander picked up the wicket of Matt Lineker as Derbyshire replied with 75 for one from 22 overs.

The only South African to miss out after Derbyshire won the toss and put the tourists in was Jacques Rudolph who was lbw for 15 in the fourth over after he played across a full length ball from Ally Evans.

Hashim Amla faced 19 balls from Evans without scoring before changing gear to take 16 off the pace bowler’s next five.

But Amla’s innings was ended on 42 by a good ball from Ross Whiteley who moved one away to knock out his off-stump.

De Villiers has yet to make his mark on the Test series but he looked in ominous form, even against an inexperienced attack, as he cruised to his half century, which included eight fours and a six, off only 46 balls.

Duminy also hit Wainwright for two sixes as he and De Villiers enjoyed themselves in the sunshine and a century for the 28-year-old looked a formality until he pulled out after hitting 16 fours and two sixes.

Wainwright took a stinging return catch to remove Duminy but Faf du Plessis and Albie Morkel plundered 123 in 17 overs either side of tea.

Du Plessis reached his fifty by pulling Evans for six and Morkel was on 49 when the declaration came after an over from Mark Footitt which cost 28. (AFP)

Kevin Pietersen and the rising power of the professional cricketer

Shane Watson urges Australia to learn from mistakes in England