South Africa next face West Indies on Wednesday, the side that bundled out the Proteas for 188 in the opening match of the tri-series.

According to CricBuzz, de Villiers also stressed that in a series where three teams play, the selection should be unpredictable and with different venues you must change, chop the side and go on. “I’m a big believer that in a series like this, where there are three different teams and venues, you have to chop and change as you go on. You have to try and be unpredictable but at the same time obtain some consistency in your performances.”

De Villiers went on to add, “We have let ourselves down a few times with our performances, but I have enjoyed the way we have changed the balance of the side. I feel all of the guys who have come in have performed well individually, but I still feel that as a team we haven’t clicked well yet. That will be our focus for tomorrow, just really operating and gelling together, if we do that I believe we’ll play those pressure situations much better.”

Talking about West Indies becoming a good ODI side in the last couple of months, he said, “They are not as unpredictable as they used to be, they have become a good ODI unit. They seem to know exactly what they are doing, they have world-class players in both their batting and bowling line-ups. They are a force, especially in their home conditions, they know what to expect and how to handle the various conditions that we are faced with here.” 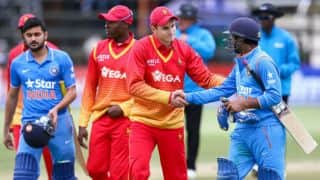