Morne Morkel denied all such rumours, which were reported by a South African newspaper regarding AB de Villiers' future in whites.

South African pacer Morne Morkel strongly denied rumours of AB de Villiers hinting at retirement from Test cricket at the end of the ongoing four-match series against England. Rapport, an Afrikaans newspaper based in South Africa had recently reported on the current South Africa One-Day International (ODI) captain hinting at the possibility of retiring from the five-day format. The newspaper also went on to cite the selection controversy during the ICC Cricket World Cup 2015 semi-final against New Zealand in which a struggling Vernon Philander was picked over an in-form Kyle Abbott allegedly after interference from Cricket South Africa (CSA) chief Haroon Lorgat. Morkel however, did not validate these reports either. Live Cricket Scorecard: South Africa vs England, 1st Test at Durban Day 3

“I think it is a story. He is still very keen to play for South Africa and to break records,” Morkel was quoted as saying according to a report on ESPNCricinfo.

Morkel added that de Villiers is currently the most inspirational member of the side, and that he manages to keep the spirit of the team high at all times despite the workload.

“Even though there was a lot of pressure on him, he has seen this movie before and he knows how to play it. The talks he gives in the dressing room give us a lot of hope. It’s very inspiring and every dressing room would love to have him,” added Morkel in the report.

De Villiers is currently keeping the wickets in the ongoing Test series against England aside from being the backbone of the batting order, scoring 49 in his most recent innings. 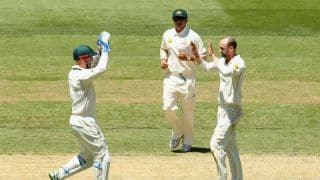