AB de Villiers wants to focus on limited-overs cricket, in order to keep his focus on the ICC World Cup 2019.

After AB de Villiers rubbished reports that he is considering Test retirement, Cricket South Africa (CSA) chief Haroon Lorgat indicated that once he returns to the format, the South Africa ODI captain will not have the comfort of picking and choosing Tests. When he clarified about his retirement plans, de Villiers also mentioned that he will be opting out of the New Zealand Tests to begin in March. De Villiers wants to focus on limited-overs cricket, in order to keep his focus on the ICC World Cup 2019. De Villiers has been out of action since August 2016 due to an elbow injury. De Villiers said he was fit again and will be playing the final T20I match against Sri Lanka on January 25.

Speaking to ESPNcricinfo.com, Lorgat said, This is a plan that we had six months ago. It’s just a case of when he starts or when he returns. Because once he starts, there’s no stopping and no time off. When you play, you play continuously. So he’s not picking and choosing. These are deliberate discussions that we’re having and which will continue. ODI cricket is the focus because he’s the captain. Test cricket is different. We’ve got a settled team; we’ve got the resources to go through. If he was not the captain of the ODI team it might have been different. Same with T20s – we’ve got enough talent there and he’s not leading the side. But with respect to ODIs, he will play every ODI because he’s the captain.”

Lorgat was not surprised by de Villiers opting out of the New Zealand Tests as per the discussions they had been having with the view to keep the World Cup 2019 as top priority. Lorgat further added, “I’m most satisfied by the kind of conversations we’re having with him. He’s clear about when he’s going to be ready and when he’s not ready. His clarity is important because then selectors are aware and we move on.”

“You’ve seen what’s happened in the last few months. We’ve built the team without AB, and that’s a very big positive. The absence of AB has allowed others to step up, and we’ve developed other players. It’s fantastic from my point of view that we have more than 11 that can take the field and be a winning formula.”

Lorgat is confident de Villiers will be back for the Tests in summer against England. His comeback will also be dependent on the form of the team members at the time, Lorgat, “If the selectors and the team feel that they have a winning team going, AB is fully aware that it’s the selectors that will determine whether he comes back into the team or not.”

South Africa won the series against Australia by 2-1 in Australia and 3-0 at home against Sri Lanka. 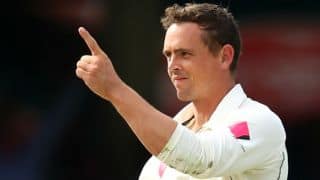 India vs Australia: Steve O'Keefe draws confidence from unofficial Tests in India in 2015