Ab de Villiers blocked his way heroically in the first session of Day five to make Australia sweat for their series win in the third Test a the Sahara stadium in Cape Town.

South Africa started the day’s play staring at defeat after Mitchell Johnson and Ryan Harris ran through the top order in quick time in the final session of Day four after being told to chase a near impossible task of chasing down 511.

Playing in front of a near-empty Newlands stadium — something that does not bode well with arguably their greatest captain South Africa’s cricketing history, Graeme Smith, will spend his final day as their captain, albeit from the dressing room.

South Africa’s next Test captain-in-waiting, de Villiers was expected to lead from the front and keep the strike as much as possible. It was in fact nightwatchman Kyle Abott who punched well above his abilities to block everything Australia could throw at him during his 89-ball seven. Even the fiery Mitchell Johnson was frustrated and Michael Clarke brought himself on to get the breakthrough they so craved in a session that yielded a mere 51 runs from 39 overs.

James Pattinson, whose fortunes and bowling rhythm has fluctuated from good to mediocre after his comeback, got a lucky break for the visitors after Abbott decided to leave a straight delivery that crashed on to his off stump, throwing all his good work down the drain.

Faf du Plessis nearly skied a Johnson delivery that was angled into his rib cage, straight to short leg but the batsman soon settled in with his illustrious mate and blocked away to glory. 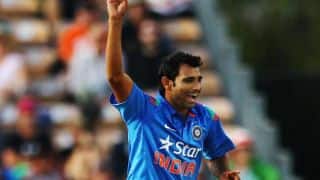 Mohammed Shami takes his 50th scalp in ODIs, against Afghanistan in Asia Cup 2014