The 24th match of the Indian Premier League (IPL) 2014, AB de Villiers‘s whirlwind knock of 89 not out, single-handily won the game for Royal Challengers Bangalore against Sunrisers Hyderabad in Bangalore.After being sent in to bat first, David Warner‘s fine half-century lifted Hyderabad to a competitive 155 for five in their 20 overs. It was a good score but with excellent batting conditions it definitely looked below par.

Chris Gayle and Parthiv Patel started the innings cautiously and Dale Steyn bowled a tidy first over, giving away just five runs of the first over. Bhuvaneshwar Kumar got things under way, beating Parthiv with a half volley which was an inside edge that went back to knock back his off stump. Much to the shock of the partisan crowd, Kohli got a nick and edged the ball to the keeper of an out-swinger to give Sunrisers Hyderabad a dream start.

Gayle, after calming waters in the initial overs, lit up when he saw Ishant Sharma and smashed the lanky Indian pacer for two back to back sixes and the crowd was on its feet. It was a brilliant exhibition of batting and it looked like the Jamaican would walk away with it.

Shikhar Dhawan then handed the ball to Karn Sharma to stem the flow of runs. Karn was tossing it up and induced Gayle to play across the line and a flat hit only found Darren Sammy in the deep and Hyderabad were elated. Ab de villiers aslo find the going tough with two flighted deliveries by Karn completely deceiving him in the first few deliveries that he faced.

Even the enigmatic Ishant Sharma was impressive in his comeback over and didn’t allow too many runs. Riley Rossouw’s welcome to the IPL was a torrid one and the South African southpaw was eating up deliveries. Perhaps that was the reason Rossouw tried a reverse sweep off a ball that had very little spin on it. RCB were 59 for four in 10 overs.

Yuvraj Singh came to the crease and de Villiers, realising the mounting run-rate, decided to go after the bowling. Earlier the impregnable South African had hit a straight six of Karn Sharma which landed straight into the water-bottle bin in the Hyderabad dugout. De Villiers then went on to play his classic loft over extra cover of Darren Sammy for another six. Yuvraj had yet another laboured stay at the crease, but it was punctuated by two stylish sixes. A straight six of Ishant Sharma was one of the best shots of the match.

Trying one shot too many, Yuvraj was caught in the deep. De Villiers changed gears yet again and there was blistering fireworks in the 16th over of Darren Sammy with two magnificent sixes. One six was over long on and there was a boundary of a full toss down the ground. De villiers mistimed a pull shot and and the ball just cleared the boundary ropes for the protea to bring up his half-century of just 23 balls with little or no support. Steyn bowled an excellent over under pressure. But de Villiers brings out rabbit out of a hat at will and a reverse sweep boundary of Bhuvaneshwar epitomised that. With Steyn being brought back for the 19th over, de villiers preserved his best for his compatriot. Two magnificent sixes with Steyn of the first two balls was followed by a four of extra cover and the best was a jaw-dropping wallop over fine leg and only four was needed of the last over.

Irfan Pathan’s last over produced some drama with Mitchell Starc run out of the first ball and de Villiers only getting a leg-bye of the next. Harshal Patel missed the next ball and it was a dot ball but got single of the next ball and de villiers pulled the curtains on one of the best IPL innings with a boundary of the penultimate ball to take Bangalore to their third win of the tournament. 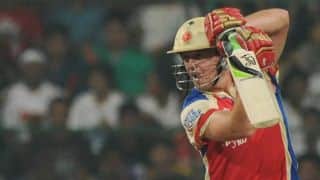 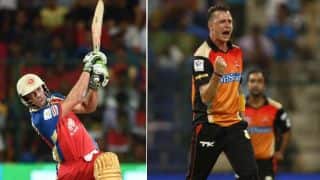 AB de Villiers vs Dale Steyn: A saga of two battles separated by two years at the IPL