Pakistan's senior all-rounder Abdul Razzaq has signed a contract with English county side Leicestershire for this season after being constantly ignored by the national selectors. 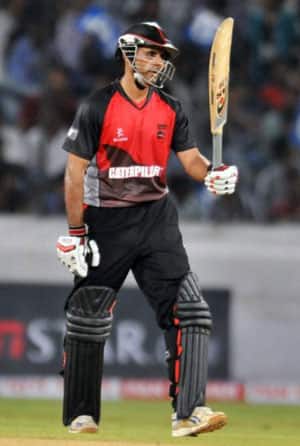 Pakistan’s senior all-rounder Abdur Razzaq has signed a contract with English county side Leicestershire for this season after being constantly ignored by the national selectors.

Razzaq will leave next week to join his county for the English Twenty20 championship.

“It is disappointing that I am constantly being ignored by the selectors and the Board. No one has called me for any fitness tests or nets,” Razzaq said.

The senior all-rounder said he was expecting to be called for the fitness test as he had made a full recovery from his shoulder injury and could now bat and bowl properly.

“I had problems with the shoulder but now it is okay and that is why I have decided to play for Leicestershire,” he added.

Razzaq, who has played 46 Tests and 265 ODIs besides 26 Twenty20 matches, said he had decided to play in England because cricket was his bread and butter and he wanted to continue playing the game.

“I will play in the Twenty20 event for Leicestershire and for that I will leave next month,” he said.

Razzaq, 32, who last played for Pakistan in an ODI in November last year, said he would have loved to be considered for the coming Sri Lanka tour.

“Obviously my first priority remains playing for Pakistan but they don’t seem to want me anymore. The way they are constantly ignoring me it seems they don’t like me. I can’t do anything about it because it’s up to them, they select the team,” he said.

Several players, including the 37-year-old Mohammad Yousuf and sidelined wicket-keeper Kamran Akmal, were part of the camp held at the NCA, triggering talks of their return to the national team.

Razzaq also said there was no controversy over his deciding to play in the Bangladesh Premier League earlier this year after making himself unavailable for Pakistan.

“There was no controversy because I had this shoulder injury and was not 100 percent fit to bowl and I told the selectors if they selected me I wouldn’t be able to bowl 100 percent and could only bat. I was honest and open with them.”(PTI)

Misbah-ul-Haq hints at leading Pakistan in all formats