Kenneth MacLeod suffered from cardiomyopathy during the match.

Kenneth MacLeod, captain of Inverurie Cricket Club collapsed and eventually died during a cup match. This was even after a player of the opposition did his best to save his life. MacLeod suffered from cardiomyopathy which is referred to as any disease of the heart muscle. It leads to decrease function. After his collapse, many players came to his help, but unfortunately they failed to save him. As per sources, MacLeaod’s age was somewhere in his early 50s. He opened for Inverurie (against Carthie) in their second innings. After he got out, he collapsed and a Carthie player tried to revive him with his medical training. The game was called off at that moment itself. ALSO READ— Raman Lamba: Swashbuckling batsman who died in tragic on field accident

The Press and Journal quoted Jess Jessiman, a fellow player saying, “He was playing cricket as normal and had been batting but he was just out and was walking back to the pavilion when he collapsed. I think he did try to come back around but it was just an incredibly difficult situation for everybody. Kenny has been playing for a long, long while, I think he followed his father into cricket and he really loved the sport.”

Secretary of Inverurie Cricket Club Andrew Stalker, said the previous night, “Kenneth was a true gentleman, a great captain and a big part of the club. Ourselves and Crathie are still in shock at what happened and so is the wider cricket community. We’ve had a lot of messages of support coming in both in person and in social media and were are very grateful for that.” ALSO READ— Wilf Slack: Tragic tale of Middlesex hero

A  mate from the match said, “Kenny was full of life and he loved cricket. He was at Mannofield just player and president of Kelburne Cricket Club, and although he had initially planned to concentrate on golf when he moved to the north-east, his love of cricket soon drew him back to the game and he joined Inverurie for the 2012 season. a few weeks ago to see Aberdeenshire play Kelburne in the Scottish Cup. This is terrible news.”

Meanwhile, the Aberdeenshire Cricket Authority said in its statement, “Our sincere condolences are with Kenny’s family and friends. He was an uncomplicated cricketer – see the ball and hit it straight, as hard as possible, and he certainly did that better than most. Off the field he was the best of company, always convivial and at the heart of the club socially as well as competitively.”

“He took on the captaincy for the 2016 season and the team was undefeated going into the match against Crathie on May 28. After a typically forthright innings, Kenny was taken ill with complications from his cardiomyopathy, as he left the field of play. It was of great comfort to his family to know that he received immediate professional attention and was given the best chance of survival. Kenny will be sadly missed.”

Qasim Sheikh, of Scotland and Kelburne cricket club, said, “I spoke with many of the club members on Sunday and they were all deeply saddened by his passing and everybody agreed he was a top guy. My thoughts are with his family.” Scotland’s most experienced cricketer Majid Haq added, “This is very sad news because he was held in very high regard at Kelburne and elsewhere. It puts cricket in perspective.” 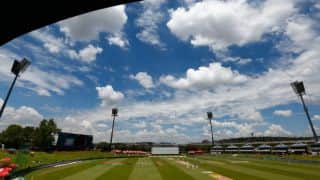