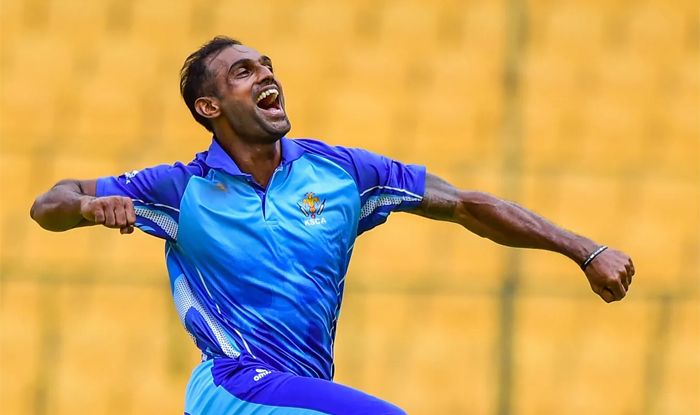 Karnataka‘s domestic veteran Abhimanyu Mithun, who earlier in the year took a List A hat-trick in the Vijay Hazare Trophy 2019-20 final against Tamil Nadu, claimed yet another hat-trick, this time in the first semi-final of the Syed Mushtaq Ali Trophy 2019-20 against Haryana, and making the feat even more remarkable is the fact that the India international claimed five wickets one over.

Haryana, who had managed 192/3 in their 19 overs, could only add two runs in the final over bowled by Mithun, losing five wickets. Mithun who had figures f 3-0-37-0 before the start of the over had the well-set Himanshu Rana caught at deep midwicket off the first delivery of the over followed by the wickets of Rahul Tewataia and Sumit Kumar to complete his third hat-trick of his career. Off the fourth ball, Mithun had Haryana skipper Amit Mishra caught off Krishnappa Gowtham.

A wide and a single followed, but Mithun finished his over in style taking his fifth wicket in the form of Jayant Yadav.

Wit this, Mithun became the only cricketer to claim hat-tricks in Ranji Trophy,Vijay Hazare Trophy and Syed Mushtaq Ali Trophy. His Ranji Trophy hat-trick came in 2007 on his debut while the List A hat-tick came earlier this year on his birthday. Also, his five wickets in a match is only the second instance in professional T20 cricket or any level of professional cricket that a bowler has claimed five wickets in a single over.

The first time this happened was in 2013 during the Victory Day T20 Cup in Bangladesh. Bangladesh international Al-Amin Hussain claimed five wickets in an over for his team UCB-BCB Eleven against Abahani Limited at Sylhet.

At the international level, the maximum number of wickets taken by a bowler is four – claimed twice by Lasith Malinga (2007 in ODIs and 2019 in T20Is). At the Test level, six bowlers have taken four wickets in an over – Eangland’s Maurice Allom, on his Test debut vs New Zealand at Christchurch in 1929-30, Ken Cranston, in only his second Test, against South Africa at Headingley in 1947. Fred Titmus, against New Zealand at Headingley in 1965. Chris Old, against Pakistan at Edgbaston in 1978, Andrew Caddick, against West Indies at Headingley in 2000 and Wasim Akram for Pakistan against West Indies at Lahore in 1990-91. 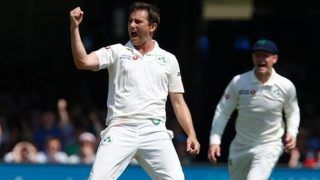