Since he made his first-class debut for Mumbai versus Tamil Nadu in December 2005, Nayar has appeared in 89 first-class matches for his home team.

Former Mumbai captain Abhishek Nayar will play his 100th first-class match for his adopted home of Puducherry when the 2018-19 Ranji Trophy beginning November 1.

The 34-year-old allrounder tweeted the news on Monday. MUMBAI to PUDUCHERRY, thank you everyone who has helped me and been part of this wonderful 20 years of khadoos cricket, right from the under 14s to 99 first class games. It s been an honour. It s an emotional moment for me but I leave as a happy man, the lion shall always roar in my heart, tweeted Nayar.

MUMBAI >>>PUDUCHERRY…thank you everyone who has helped me and been part of this wonderful 20 years of khadoos cricket,right from the u14s to 99firstclass games..it’s been an honour.it’s an emotional moment for me but I leave a happy man.the lion shall always roar in my .

Nayar had been dropped from Mumbai s last Ranji Trophy league match in November 2017, after he made 130 runs and took eight wickets in five matches. He did not get a look-in again. The decision, at the time, was termed tough by Mumbai s chief selector Ajit Agarkar.

Since he made his first-class debut for Mumbai versus Tamil Nadu in December 2005, Nayar has appeared in 89 first-class matches for his home team, from which he scored 4921 runs at an average of 43.93, with 11 centuries and 28 fifties. His other 10 first-class matches are equally divided between West Zone and India A.

One of Mumbais stalwarts is biding adieu to Mumbai cricket. I have known this guy for a long time and I can honestly say he s the most selfless man I have met. Giving back to the game/players is his forte. Good luck with all the exciting things ahead buddy @abhisheknayar1 pic.twitter.com/v39LdjlSsH

Speaking to ESPNcricinfo on Monday, Nayar said that he had no regrets about his long relationship with Mumbai cricket.

“Initially, I was very sour. I wasn’t very happy with how things went – 100th game, in Mumbai, versus Tripura,” he said. “I was just getting back into form, getting back my flow. I kept thinking ‘Why? What can the thinking be? I mean, I’ve done so much. I’ve been there. I’ve always been someone who has given everything for the team. Why?’

“After I got dropped I played a lot of club cricket, company cricket and did well there. But I still didn’t get picked anywhere I don’t want to judge anyone. I have immense respect for Ajit as a cricketer, person and friend. He’s one of the persons I believe is honest enough and practical enough in that whole set-up. I won’t lie – initially I felt like, ‘What the hell yaar? It’s just one game. They could have given me that and asked me to go.’ But it’s fine. And he still had the courtesy to pick up the phone, call me, and tell me in person – which for me shows character. A lot of people have been dropped in the past just like that, said Nayar, who played three ODIs for India in 2009.

The BCCI last year added Puducherry as one of its associate members. 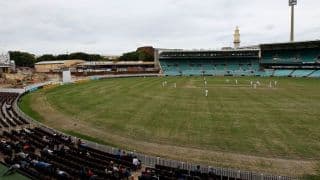