Abhishek wants to grow more as an aggressive cricketer, unlike Dravid and more like Yuvraj Singh or MS Dhoni.

It was not easy for Abhishek Sharma to put up a remarkable innings coming in to bat late, that too, after Prithwi Shaw, Manjot Kalra and Shubman Gill had produced dazzling performances already. But many do remember how Abhishek hammered Australia bowlers in ICC Under-19 World Cup during his knock of 23 off 8. After India qualified for quarter-final with three consecutive victories, Abhishek admits, his experience of captaining India Under-19 team in Asia Cup has provided him to up his game.

We committed a mistake (in Asia Cup) but this time we are fully ready. We re concentrating on every team but it s important to work on our strengths. We want to dominate. We have played some very good cricket so far, Hindustan Times reported Abhishek saying.

I ve grown in confidence since captaining the side. Captaincy does not allow you to be complacent at any stage. It just makes you raise your own bar of performance. You want to be a better player. I m really happy with my progress. The dream is to win (the World Cup) and make it to the senior side. Hopefully, I ll be able to achieve that, he added.

The entire Under-19 team has thanked coach Rahul Dravid in different occasions and Abhishek is no different. Rahul sir helped me a lot. He always tells me to convert my starts into big knocks. Batting at No. 5, 6 is a different task altogether.

However, Abhishek wants to grow more as an aggressive cricketer, unlike Dravid and more like Yuvraj Singh or MS Dhoni.

Yuvraj Singh is one player I look forward to. Apart from him, I really admire MS Dhoni. I m a big fan of his finishing skills. 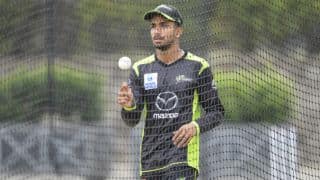