Adam Zampa took 6 for 19 in Match 40 of Indian Premier League 9 between Rising Pune Supergiants and Sunrisers Hyderabad at Visakhapatnam.

Adam Zampa took 6 for 19 in Match 40 of Indian Premier League (IPL) 2016 between Rising Pune Supergiants (RPS) and Sunrisers Hyderabad (SRH) at Visakhapatnam. Playing for RPS, the Australian leg-spinner was introduced in the eighth over, where he went wicketless for 5 runs. He did not bowl again till the 16th over, but in the space of his final 3 overs he ended up taking 6 for 14. Curiously, 6 for 14 is the best figures in IPL history. Sohail Tanvir had achieved the feat for Rajasthan Royals (RR) against Chennai Super Kings (CSK) in the inaugural edition of the tournament. Live Cricket Scorecard: Rising Pune Supergiants vs Sunrisers Hyderabad, IPL 2016 Match 40 at Visakhapatnam

Zampa’s figures of 6 for 19 are the second best in IPL, but only the 15th best in Twenty20 (T20) cricket. There has never been a seven-wicket haul in T20 cricket, with Somerset’s Arul Suppiah’s 6 for 5 against Glamorgan in 2011 being the best figures in T20s. Shakib Al Hasan has the next best figures with 6 for 6 while playing for Barbados Tridents against Trinidad & Tobago Red Steel in 2013. Lasith Malinga is next on the list with 6 for 7 for Melbourne Stars against Perth Scorchers in 2012. Ajantha Mendis, with 6 for 8 for Sri Lanka against Zimbabwe in 2012, is the only cricketer with two 6-fors in T20I cricket. No other cricketer has even one. Live Cricket Updates: Rising Pune Supergiants vs Sunrisers Hyderabad, IPL 2016 Match 40 at Visakhapatnam 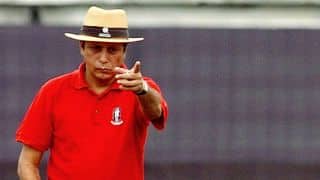