England had already swept the ODI series 5-0. Now they topped that with a T20I win.

Jos Buttler hit the fastest fifty by an England batsman in a T20 International to lay the platform for a 28-run win over Australia at Edgbaston on Wednesday. Australia, set 222 for victory, lost half their wickets inside 9 overs to be 72 for 5. Aaron Finch, their captain, kept them in the match with a fine innings of 84 while sharing a sixth-wicket stand of 86 with Ashton Agar, but the asking rate required Finch to keep going for big hits and when he holed out off Adil Rashid, Australia were 158 for 6 in the 16th over.

Rashid led England’s attack with 3 for 27 in 4 overs before Chris Jordan struck twice in two balls to leave Australia on the brink of defeat at 174 for 8. Australia were bowled out for 193 with 2 balls to spare. This latest reverse meant they had still to win an international match since Justin Langer became their coach after Darren Lehmann resigned in the fall-out from March’s ball-tampering scandal in Cape Town.

Buttler, fresh from his man of the series heroics in a 5-0 ODI sweep of Australia, including a match-winning 110 not out in a dramatic 1-wicket victory in the series finale at Old Trafford on Sunday, was promoted to open in this one-off T20I. He responded with a 22-ball fifty, including 6 fours and 4 sixes on his way to 61.

Alex Hales made 49 after Jason Roy (44) put on 95 for the first wicket with Buttler. England’s total was their second-highest in this format, behind the 230 for 8 they made against South Africa in Mumbai two years ago.

Buttler was soon into his stride after Finch won the toss and fielded, launching debutant Mitchell Swepson’s sixth ball for a straight six. Roy should have been out for 27 when he drove Agar straight to long-off only for Kane Richardson to drop a simple catch.

The next two balls saw Buttler scoop a four and smash a six. An ‘inside-out’ six over extra cover off fast bowler Billy Stanlake was even more audacious. The next ball saw Buttler go to fifty with a scooped four just beyond the reach of wicket-keeper Alex Carey. Buttler eventually became Swepson’s first international wicket when he holed out in the deep, with Roy falling next over when he skyed Stanlake to Finch at mid-wicket.

Hales kept the runs coming before he was brilliantly caught and bowled one-handed off Marcus Stoinis’ first ball after he flat-batted a bouncer back at Stoinis.

Australia were soon 33 for 2 in reply after D’Arcy Short and Glenn Maxwell both fell cheaply. Spin, Australia’s Achilles heel during the ODI series, then proved their undoing in this match. After Moeen Ali had Travis Head caught in the deep, Rashid took 2 for 0 in 3 balls. First he bowled Carey (3) with a quicker delivery and then dismissed Stoinis for a duck when the latter drove him straight to Roy at long-off.

Player of the Match: Adil Rashid. 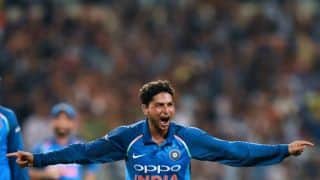 India steamroll Ireland in the 1st T20I, win by 76 runs