Aditya Thakare who made his debut in Ranji Trophy final for Vidarbha against Delhi has been called to replace injured Ishan Porel.

Aditya Thakare who made his debut in Ranji Trophy final for Vidarbha against Delhi has been called to replace injured Ishan Porel. Porel injured his left foot during the India-Australia match.

Porel was the star bowler in the warm up match against South Africa where he took four wickets. During India’s first match he only bowled 4.1 overs and left the field. He was not seen on field later and did not participate in practice session eventually missing India’s second match against Papua New Guinea.

Thakare performed impressively in his debut game where he took two wickets in the first innings with his first wicket coming in the opening over of the match. In the second innings, he went wicket-less but had the best economy rating 1.17.

Thakare is the second player from Vidarbha to be named in the U-19 squad. Vidarbha skipper, Faiz Fazal was the first one who was selected in the 2004 World Cup. Unfortunately, Fazal had to return home after injuring his thumb in a practice match.

India currently are table toppers in Group B with four points, they play Zimbabwe on January 19. 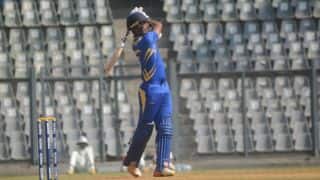