Aditya |Verma insisted that Amitabh Chaudhary is misleading the court and that he would the raise the issue before them.

New Delhi: Aditya Verma, secretary of the ‘unclaimed’ Cricket Association of Bihar (CAB) and the original petitioner in the Board of Cricket Control India (BCCI) case, on Tuesday alleged that Amitabh Chaudhary had given a false undertaking to the Supreme Court in order to become BCCI acting secretary. Aditya’s comments came after he filed a plea in Supreme Court, alleging that Amitabh had disregarded the court’s direction by inviting disqualified cricket administrators to attend the board’s meetings. Lashing out at the BCCI acting secretary, Aditya said that while former BCCI president Anurag Thakur did the mistake unintentionally, Amitabh committed the mistake intentionally. Supreme Court issues show cause notice to BCCI acting secretary Amitabh Chaudhary

“If you ask me to make a comparison, former BCCI president Anurag Thakur made the mistake unintentionally. But Amitabh Chaudhary has committed the mistake intentionally. He was an IAS officer who applied for VRS. He has more knowledge of law than us. But the reply which I saw as the petitioner, I was amazed to see a person misleading the highest court of the like this,” Aditya told ANI. “He [Amitabh Chaudhary] had claimed that they had gone with the decision of Supreme Court and did not allow any nominee of the state cricket association to attend BCCI’s Special General Meeting on August 24,” he added. CAB targets BCCI in SC for calling disqualified cricket administrators to SGM

The CAB secretary said that the BCCI are themselves making the mistakes and conveying to the court that they are following their decision of not allowing the nominee of the various state cricket association to attend the meeting. “I was shocked to listen the same because Jharkand State Cricket Association [JSCA] has not yet implemented the Lodha Panel recommendations. And Debashish Chakravarty was made the secretary who was present in the meeting as nominee. They are themselves making the mistake and conveying the court that they did not allow the nominee to attend the meeting,” he said.

Aditya insisted that Amitabh is misleading the court and that he would the raise the issue before them on Thursday. “Secondly, he had given false undertaking in court in order to become the acting secretary of the BCCI. In one of the replies to an RTI to a cricketer from Jamshedpur, it was mentioned that state secretary Amitabh Chaudhary, secretary Rajesh Verma and treasurer P Sen were still signing as signatories. Now, you are misleading the court. You are saying in reply that you did not allow the nominee in the meeting. JSCA has not yet implemented the Lodha committee reforms and there have been no elections. I will raise this issue on Thursday,” he added. 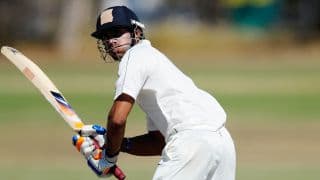