Aditya Verma has sought President's intervention into the matter.

Accusing the Indian cricket board of wrongfully publishing the photographs of the Indian President Pranab Mukherjee and Prime Minister Narendra Modi in its recent annual report, Cricket Association of Bihar (CAB) secretary Aditya Verma has sought the intervention of the country’s first citizen in the matter. Verma, in a letter to President Pranab Mukherjee Sunday, charged Board of Control for Cricket in India (BCCI) officials of dragging the constitutional heads of the country into a controversy by publishing their photographs without approval on the cover page of the report.

Verma has earlier dragged sidelined BCCI president N. Srinivasan to court over spot fixing in the Indian Premier League (IPL). “Never before in the 87 years’ history of the board were the photographs of the president and the prime minister used in the annual report,” Verma said in the letter dated January 11.

“The BCCI is trying to gain cheap publicity after its functioning has been shrouded in controversy because of the involvement of its top functionaries in IPL betting and spot fixing. The worst is that the BCCI has used the photographs at a time when it has failed to hold its annual general meeting and the elections of office bearers because of the case,” he said referring to the ongoing hearing of the plea in the Supreme Court.

Verma, in the petition, has pleaded for Srinivasan to be barred from seeking re-election to the post of board president and for terminating IPL franchise Chennai Super Kings (CSK), owned by his company India Cements Limited, on the grounds of conflict of interest. Verma also asked Mukherjee to look into the matter, it being “one of the most shameful deeds ever done” by the BCCI. 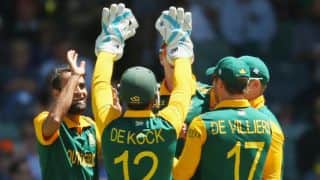