Adjusting to the conditions was physically tough: Dravid

Adjusting to the conditions was physically tough: Dravid

Drained after hitting another one of his typically resolute hundreds, veteran Indian batsman Rahul Dravid said it was tough adjusting to the conditions in the ongoing first cricket Test against the West Indies here. Drained after hitting another one of his typically resolute hundreds, veteran Indian batsman Rahul Dravid said it was tough adjusting to the conditions in the ongoing first cricket Test against the West Indies here.

Dravid, for whom the 112-run knock on the third day of the match on Wednesday was his 32nd Test century, confessed he found the effort physically very demanding at the Sabina Park.

“It was tough physically. I came here just three days ago. The jet lag, getting up early morning, having not played a Test for a long time and playing in these hot conditions has been very tiring,” remarked Dravid, who batted for over 400 minutes for his 112 runs and hit 10 fours and a six from the 274 balls he faced.

“You could do as much physical workout; do the bike and gym and run laps of ground but the sheer effort of batting and fielding and staying on the field and then immediately come to bat, needs practice.

“I sweat a lot so physically it’s always been a contest for me. That’s why I have to work harder on my fitness for I know the way I bat; I have to stay in for long periods.”

“But it was a big Test match and I was fired up…I felt as if I was in my space. Hopefully, we can win the Test and get a day’s rest.”

Dravid’s example was lost on young batsmen, such as Virat Kohli and Suresh Raina, who are seen as India’s next generation of Test batsmen.

“I try telling them (the youngsters) to weather the storm; go through the intensity of a spell which might last 8-10-12 overs.”

“You fight your way and then it becomes easy. It’s easy to get caught up when things around you are buzzing with noise; balls are flying and spinners are getting big help. You then start thinking it’s hard. But if you last it out, it becomes easier,” Dravid said.

“Today in the morning, Ravi Rampaul kept it tight. I knew I had to go through that spell. You need to back yourself; need to enjoy the contest. It’s going to get easier and then you must be there to capitalise on it,” said Dravid, allowing a rare peek in his batting methodology.

“I remember in Johannesburg (in 1997), Donald and Pollock were bowling a great spell and I thought it was really tough and I would never be able to play. You need to get through it, fight your way, and grit your teeth. Suddenly, it gets easier.”

Dravid managed to make 148 runs in that Test which happened to be his first century in his ninth match.

Dravid claimed the intensity of the contest at Sabina Park, ironically, helped him get into his space.

“I love the contest. When you are back to the wall, it improves your concentration, your focus. It helped me focus my mind, get it in the right place and I felt in control.

“For long periods of time, I didn’t score many runs but considering the wicket it probably was the right thing. “

Interestingly, Dravid didn’t find it a demand that he rarely received support from his teammates at the other end.

“It doesn’t make a difference to me, what’s happening at the other end. My job is to focus. But when you lose wickets, it’s the opposition who picks up. When a new batsman comes in, you know the rivals have got their game together and there would be another 12-14 overs of intensity.”

Dravid also explained the reason of his refusal to take singles when Amit Mishra came in to bat.

“I was refusing singles of the first two balls. Sometimes it relaxes bowlers and I was hoping it would give me a four-scoring opportunity.”

The stand with Mishra turned out to be a critical one as 56 runs came for the ninth wicket and not only Dravid could get to his century but also the lead stretched beyond 300 runs.

Dravid termed it a good cricketing pitch, though slightly in favour of bowlers.

“It’s a good cricket wicket. It’s slightly in favour of bowlers and that’s how it should be. The spinners are getting turn; pacers are getting bounce. If you bowl in right areas, it’s difficult for batsmen. If you bowl badly, because of the bounce, the batters can capitalise.”

The veteran middle-order batsman though felt his team held the advantage in this Test.

“If we get early wickets, we can run through. But we know Shivnarine Chanderpaul is a dangerous player. They have got some good young players. From our perspective, if we bowl in the right areas, we will create opportunity.

“We need to be patient and make batsmen play all the time.”

Dravid singled out Ishant Sharma and Praveen Kumar for their bowling effort in this Test so far.

“Ishant has been very impressive. Today his bowling was terrific. Praveen is a very skillful, crafty, clever bowler.” 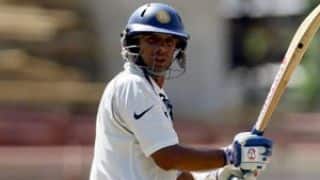