Afghanistan A made a fine start to their tour by beating Zimbabwe A by five wickets in an abbreviated match, in which the winning of the toss proved crucial.

Afghanistan A made a fine start to their tour by beating Zimbabwe A by five wickets in an abbreviated match, in which the winning of the toss proved crucial. With so much heavy rainfall during the past month, there were concerns that this match, and even the entire Afghanistan A programme, might fall victim to the weather. Surprisingly, however, despite more heavy overnight rain, the Harare Sports Club ground recovered remarkably quickly and a start was possible at 1.45pm, with the team innings limited to 28 overs each. Zimbabwe A played an experienced side led by PJ Moor, while in contrast the Afghans had only two players with more than two official List A limited-overs matches to their credit, Shafiqullah the captain and Karim Sadiq.

Despite their inexperience, though, the visiting team contains much raw talent. Afghanistan A won the toss, a considerable advantage to them, and put Zimbabwe A in to bat. They quickly lost Timycen Maruma, caught at the wicket off the seamer Abdullah Adil without scoring. Charles Kunje scored six before he was late on a pull stroke against the same bowler and holed out to mid-on, leaving Zimbabwe A on 16 for two off six overs, a painfully slow start considering the 28-over limit.

However, conditions were not easy for batting with the pitch still damp and slow, and the outfield very heavy. Moor, in next, was the most likely man to set things straight, in partnership with Innocent Kaia. With two fours over the slow outfield and a drive for six, he scored 22 off 19 balls, but then, no doubt hampered by the slow pitch, hit a low catch to midwicket.

Kaia showed good application but was unable to work the ball for singles, hindering his team s effort as he struggled. Eventually, his frustration got the better of him and he was bowled for 21 off 44 balls, by the left-arm spinner Shahidullah; 57 for four in the 16th over. Ryan Burl, after missing most of last season due to injury, skilfully kept the score moving from the start of his innings, and Tarisai Musakanda also began to find his touch.

It looked like a promising partnership was developing, but Burl too was betrayed by the pitch, and drove a catch after scoring 12 off 14 balls; 75 for five in the 20th over. Musakanda drove two successive balls from Shahidullah for four, but the normally aggressive Nathan Waller struggled to time the ball.

He eventually holed out in the deep for 11 off 16 balls, but his partnership with Musakanda added 35 runs, making the total 110 for six after 25 overs. The tail had little to offer, and the last three wickets actually fell to successive balls from Adil, but, since the first was a run-out, there was no hat trick. Musakanda was left stranded for a fine 37, scored off 41 balls, but his team was dismissed for 120 off only 26.5 overs.

In these conditions it was by no means as poor a total as it appeared, but it certainly gave the Afghan team confidence and they left the field glowing with delight. The Afghan batsmen, Imran Janat and Shahidullah, struggled at first against the pace of Tendai Chatara, but were helped by five leg-side byes from Neville Madziva.

Carl Mumba replaced Madziva, and bowled an amazing short ball that bounced like a tennis ball at least two metres over the batsman s head. His next delivery was another attempted bouncer, which Janat slashed over the slips for six. But generally the Afghan openers were content to play steadily, as they were not under great pressure in needing a scoring rate below 4.5 an over.

They did take a few risky singles, but the Zimbabwean fielders were unable to hit the stumps. Conditions for batting were steadily improving under a warm sun, and the openers seemed to be finding it easy until the stand was broken at 49, after 11 overs, the left-handed Shahidullah (22) driving a catch off the left-arm spinner Wellington Masakadza.

Now Zimbabwe A began to fight back, in the person of Waller, who took three wickets in quick succession: Janat for 28, the experienced Karim Sadiq for three and Younas Ahmadzai (8). The score was now 78 for four in the 18th over, but Shafiqullah was not to be fazed by the possibility of a real collapse.

He put Waller in his place with powerful hits for four and six, and then slog-swept a ball from Kunje for another six. But in the same over he pulled the ball straight to midwicket, where Maruma held a blinding catch. He made 25 off 17 balls, a brief but vital innings, and Afghanistan A were now 102 for five off 21 overs, within touching distance of victory.

Khaibar Omar took over the mantle of Shafiqullah and steered his team to victory with more than four overs to spare. He finished with 17 not out off 20 balls, and the Afghans celebrated. Zimbabwe A were certainly handicapped by losing the toss, but the tourists nevertheless won by a comfortable five wickets. The two sides will meet again on Sunday for the second game of the five-match series at the same venue. 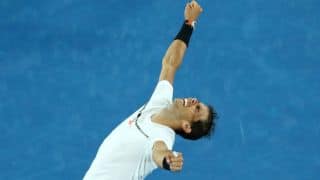 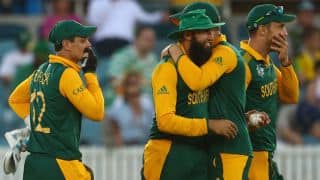