The next four days will be the final swansong as Associates for Afghanistan as well as Ireland.

After winning the Intercontinental title in 2009-10, Afghanistan faced tough competition in 2011-13 campaign. Ireland beat them in the final. Afghanistan have proven over time why they deserved a Test status. Cricketers like Mohammad Nabi and Rashid Khan have now become household names. Ireland, too, have walked head-to-head with Afghanistan in the recent times. They won the series against UAE earlier this year. They posted stiff competition against Afghanistan in India thereafter.

Both the teams would aim for perfect finish before heading into the Test cricket zone. On the occasion of their final match as Associate nations, here is what the skippers of the teams and team members had to say to ICC:

It has been our goal to win the ICC Intercontinental Cup

It has been our goal to win the ICC Intercontinental Cup and we are very much looking forward to the final match. We have had a number of training and preparations camps over the past year, the latest of which was in India. This has been very helpful in our preparation and are confident ahead of the match against UAE. We have come a long way from the beginning of this competition in 2015, where we are now playing test cricket and have obtained Full Member status, we want to end with winning the I-Cup, said Asghar Stanikzai.

The squad are really looking forward to the match we have been preparing well with a camp in La Manga and training in Dubai as well. It has been a great journey for ourselves and this tournament has played an important role in that as we have won it four times. We will be looking to finish strongly with a win against Scotland, as we are still in contention to win the competition if things go our way in the other match, but we have to take care of things at our end. Any match against Scotland is going to be a tough game, said William Porterfield.

Mohammad Nabi reflected on Afghanistan s journey and said, It’s been quite a good journey the last six or seven years starting from 2010, I-Cup games. We played our first game against Zimbabwe A and we enjoyed that. It’s quite good memories over the years, quite good wins as well. The first time we played the I-Cup, we won the title as well. People think that Afghanistan just plays the T20 game well, but I know Afghanistan team plays four-day and Test very well because of quality spinners and quality fast bowlers. We have the kind of batsmen that can play four-day and Tests. 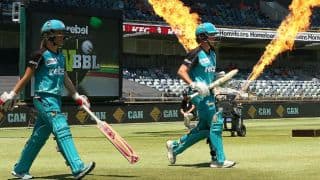