Afghanistan registered a closely-fought two-wicket victory in the third game of the four-match One Day International (ODI) series against United Arab Emirates (UAE). Chasing a target of 274,  Mirwais Ashraf‘s brought up the winning runs with a six off the fourth ball of the final over, completing his half century in the process in 51 balls and helping the Afghans stay alive in the series, which now stands at 2-1 in favour of UAE.

UAE earlier finished on a total of 273 for the loss of five wickets from their quota of 50 overs. Skipper Khurram Khan once again shone with the bat, remaining unbeaten on 85 from 80 balls. Mohammad Shahzad was the other star of the UAE innings, with a knock of 62 from 59 balls. Dawlat Zadran was the pick among the Afghan bowlers with figures of two for 51.

Afghanistan were off to a healthy start, scoring 60 runs in eight overs at a run-rate of over seven, before Nawroz Mangal departed on a disappointing score of 10. Javed Ahmadi, who eventually emerged the top-scorer for the Afghans, was next to depart on a score of 67 from 45 balls, scoring a majority of the 91 runs that had been scored by his team until his dismissal.

Ahmadi’s departure was marked by a series of blows for Afghanistan, with the rest of the top and middle-order departing for disappointing scores to leave the visitors trailing at a score of 169 for six. UAE looked set to clinch the series 3-0 at that point, though Shafiqullah Shafiq and Mirwais Ashraf had other plans.

The pair added a much-needed 50-run stand in 54 deliveries, bringing the tilt of the game back to a balance. The duo kept the boundaries, especially the sixes, coming in at regular intervals in order to keep up with the run-rate. Shafiqullah departed on a score of 39 after getting caught and bowled by Rohan Mustafa, with Afghanistan losing their seventh wicket for 219 runs.

Ashraf wasn’t done as yet, and decided to play the role of a finisher for his side. Dawlat Zadran provided some support from the other end, scoring 17 runs from 26 runs. Zadran was dismissed off the bowling of Khurram Khan, with Afghanistan a mere 16 runs away from a victory.

Ashraf brought up his victory in style, smashing a six off the fourth ball of the final over bowled by Krishna Karate, bringing up his second ODI half-century in the process. 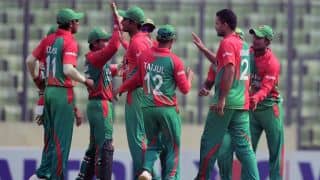 Bangladesh vs Zimbabwe and other tour whitewashes