Afghanistan continued their dominance over Zimbabwe in the fifth and final ODI Sharjah Cricket Stadium. Already leading the series 3-1, Afghanistan claimed the dead rubber by a whopping 146-run margin as Zimbabwe’s miseries prevailed. The Zimbabwe batsmen failed to compliment their bowlers’ efforts to concede the match while chasing a modest 242.

Electing to bat, Afghanistan lost Mohammad Shahzad early. Nonetheless, Javed Ahmadi and the in-form Rahmat Shah stitched a 129-run stand to prevent any damage. However, the momentum slipped from thereon. Afghanistan, 142 for 1 at one stage, were reduced to 163 for 5. Sikandar Raza continued to chip in with wickets in middle overs, and was supported by Tendai Chatara. Graeme Cremer removed skipper Asghar Stanikzai.

Rashid Khan and Sharafuddin Ashraf then bailed their side out and added 64 for the last 2 wickets. Though Afghanistan could not cross 250, they certainly bettered their position after a middle order collapse.

In pursuit of 242, Zimbabwe batsmen again failed collectively. From 72 for 2 they were reduced to 77 for 6. In the end they even failed to reach three figures. Craig Ervine and Brendon Taylor got starts, but Solomon Mire, Raza and Malcolm Waller did not. In all, seven batsmen departed without reaching double digits.

From Afghanistan, the wicket-takers were Sharafuddin, Mohammed Nabi and Rashid. Poor shot selection and failing to read spin again cost Zimbabwe their fourth game of the series.

Man of the Match: Sharafuddin Ashraf.

Man of the Series: Rashid Khan. 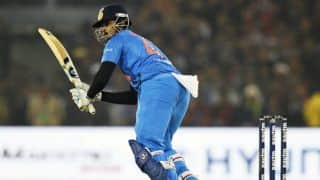