Afghanistan with the win went past Sri Lanka in the ICC T20I ranking as they gained 8th rank.

Afghanistan posted a competitive total of 158 after they were put to bat in the second T20I against Zimbabwe iat Sharjah. Mohammad Nabi was the top run scorer for Afghanistan again as he scored 45 off 26 with 2 fours and 4 sixes. Tendai Chatara took 3 for 20, all his wickets came in the 19th over. Zimbabwe however lost the match by 17 runs.

Zimbabwe gave a tough fight chasing 159 as they were 102 for 3 after 15 overs. Sikandar Raza fought well for his 40 after being dropped on 0 by Nabi. However he could not take Zimbabwe home.

Afghanistan with the win went past Sri Lanka in the ICC T20I ranking as they gained 8th rank.

Afghanistan were 139 for 4 by 18th over as the batting line up tumbled to 158 for 9 in 20 overs. They lost six wickets in the last three overs. The last five wickets fell for just three runs. Three of the last four players dismissed were out on a duck.

Afghanistan could have easily managed a score past 180 but Zimbabwe’s death bowling restricted them to under 160.

Mohammad Nabi was the top scorer for Afghanistan in both the matches with score 40 and 45 respectively. Nabi has scored almost half of the runs in the series by hitting sixes. He hit a total of seven sixes and scored 42 runs of his total of 85 runs by sixes.

Nabi hit the ball out of the stadium a number of times in both the matches. He also took one wicket in the match dismissing Brendan Taylor. 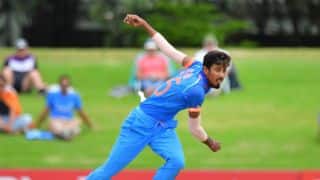