South Africa posted a second consecutive 200-plus total when they finished their first innings with 209 runs on board.

Afghanistan fell short by 37 runs in their chase of 210 against South Africa during their Group 1 match of ICC World T20 2016 at Mumbai on Sunday. Chris Morris was their pick of the bowlers with four scalps in 4 overs giving 27 runs. The other wicket-takers for South Africa were Kasigo Rabada, Kyle Abbott and Imran Tahir. There were fireworks Mohammad Shahzad from over No. 1 when he smashed a six and a boundary off Kasigo Rabada’s bowling. Kyle Abbott came in next to get thrashed left and right for three sixes and a four, thereby bagging 22 runs off the second over. Rabada was back and the result was same, a six and a four and Afghanistan added another 14 runs on board. With this win, South Africa are on the second spot of the Points Table of Group 1 of ICC World T20 2016 and Afghanistan are at the bottom of the table.  FULL SCORECARD: South Africa vs Afghanistan, T20 World Cup 2016, Match 20 at Mumbai

When Afghanistan brought up their first fifty, 44 runs of those belonged to Shahzad. The faces of the Proteas’ pacers showed how clueless they were. Chris Morris however finally made the first breakthrough. A superb 149kn delivery from him, while Shahzad tried to go big once again, he missed it and got his middle stump smacked. That dismissal saw Afghan skipper Asghar Stanikzai at the crease. He along with Noor Ali Zadran ensured the asking rate was maintained well above 10.

Those instances must have brought back tough memories for South Africa from their previous game where England had chased down their mammoth target of 230 successfully.

Before Stanikzai got going, Morris sent him back to the dugout. Stanikzai just touches it which was caught easily by Quinton de Kock behind the wickets. Gulbadin Naib was next at the crease and went off the mark with a boundary. He left two balls which was followed by a desperate shot right over the bowler’s head for a four. After Shahzad’s dismissal, it was Naib who took charge of Afghanistan’s innings. Next came two sixes and three boundaries, clearly had given tough time to the South African attack.

South African spinner, Imran Tahir was next in action and was expected to take a wicket even if the batmen went after him initially. He removed the opener Noor Ali Zadran in the 12th over, leaving Afghanistan at 110 for 4. They needed another 100 off 48 balls from here and with Gulbadin still at crease, it wasn’t impossible. Kyle Abbott made up for his previous expensive overs with claiming Gulabdin’s wicket. The Afghan smashed a 18-ball 26 before getting dismissed in the 11th over.

That was just followed by the other batsmen falling in quick succession, no big partnership was set after the fall of Gulabdin.

Earlier, South Africa posted a second consecutive 200-plus total when they finished their first innings with 209 runs on board.  It was a joint effort from AB de Villiers, Quinton de Kock and Faf du Plessis who contributed with the scores of 64, 45 and 41 that led South Africa to this mammoth total. The bowlers who bagged wickets for Afghanistan were Mohammad Nabi, Amir Hamza, Dawlat Zadran and Shapoor Zadran. However, their spells were not good enough to stop this world class batting line-up from scoring big in a must win match for both the sides. 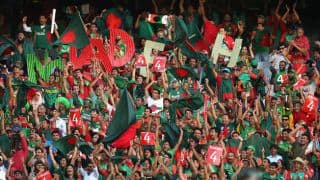