Afghanistan's cricketers have become the unlikely flag-bearers for the minnow nations at the World Twenty20 in Sri Lanka with an eye-catching, fearless display in their opening game against India. 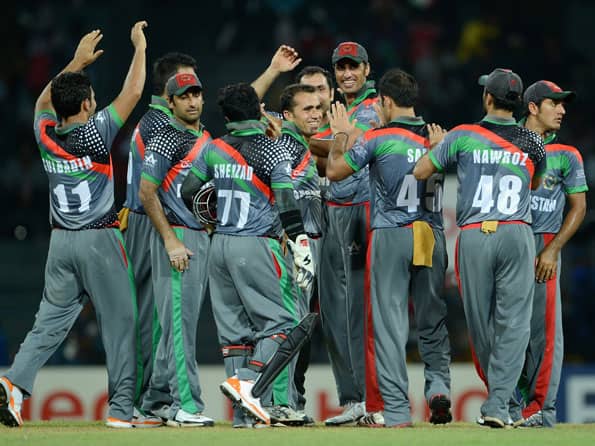 Afghanistan‘s cricketers have become the unlikely flag-bearers for the minnow nations at the World Twenty20 in Sri Lanka with an eye-catching, fearless display in their opening game against India.

The part-timers from the war-ravaged nation, many of whom took up cricket in refugee camps in Pakistan, gave India’s multi-millionaires a scare in their opening match in Colombo on Wednesday before lack of experience cost them.

At the Premadasa stadium, they let India off the hook with four dropped catches and 14 wides but still restricted one of the most formidable batting line-ups in world cricket to a manageable 159-5.

In reply, Afghanistan raced to an impressive 75-2 in the 12th over before a late collapse saw the non-Test side bowled out for 136 with three balls to spare, losing by 23 runs.

With Ireland and Zimbabwe crashing to big defeats in their opening matches in the 12-team tournament, Afghanistan’s gritty display was a strong statement of intent from the lower-ranked teams.

Afghanistan’s rapid rise in world cricket — they were playing in the lower divisions until five years ago before qualifying for the World Twenty20 in 2010 — is one of the most inspirational stories in the sport.

Their Pakistani coach Kabir Khan attributed the dramatic improvement to the challenges and hardships the cricketers faced at home, with their love for the sport acting as the driving force.

“They have been through difficult conditions during the war,” said former Test player Khan.

“This team is like one family. If a player’s family is struggling, others in the team rally around him and help him as if he was their own family member.”

The coach said Afghanistan’s defeat against India boiled down to their lack of experience against top teams.

Of their 12 T20 internationals so far, Afghanistan have played just three against Test sides — two against India and one against South Africa.

“The dropped catches and the batting collapse at the end came because the boys were unable to withstand pressure at crunch situations,” Khan said.

“India are always under pressure, but we play less international cricket. We play less against the top sides.”

India’s in-form batsman Virat Kohli, who scored a half-century, conceded Afghanistan gave his side a fright.

“There were a few tense moments out there,” he said. “They had nothing to lose. They went out there to enjoy and express themselves. We needed to stay calm during those tricky situations.”

The stand-out moment of the match was the “helicopter” shot employed by Afghanistan’s stocky wicketkeeper-batsman Mohammad Shahzad to whip Zaheer Khan through mid-wicket for a four.

The stroke — played with a flick of the wrists — was made famous by Indian captain Mahendra Singh Dhoni, who smiled wryly from behind the stumps as Shahzad sported a wide grin.

Afghanistan take on defending champions England in their next game in Colombo on Friday. (AFP)

Cricket Australia to run training program for coaches in India