Afghanistan players upbeat ahead of ODI series against Pakistan

Afghanistan players upbeat ahead of ODI series against Pakistan

Afghanistan team players are excited and have promised to put up their best showing in their first-ever One-Day International against Pakistan in Sharjah on Friday, an official said. 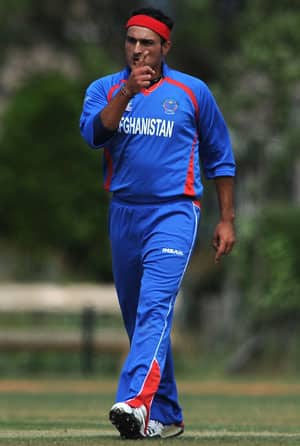 Afghanistan team players are excited and have promised to put up their best showing in their first-ever One-Day International against Pakistan in Sharjah on Friday, an official said.

The war-torn country has played 18 One-Day Internationals since gaining status in 2009 but all their matches were against associate and affiliate teams Canada, the Netherlands, Ireland, Kenya and Scotland.

And the prospect of playing Pakistan, World Cup champions of one-day cricket in 1992, left the Afghanistan players ecstatic.

“It’s a great opportunity for Afghanistan players and they can’t wait for Friday,” team manager Shafiqullah Stanikzai told AFP. “It’s a tough challenge for the team but we will show our qualities and fight to the last.”

Of their 18 ODIs to date, Afghanistan have won 11 and lost seven and Stanikzai said despite the big challenge his team will not let their fans down.

“The Afghanistan team is an entertainment package and we will try to give the best possible fight to Pakistan, who are the form team after beating England 3-0 in Tests and doing well in one-day cricket recently,” said Stanikzai.

The cricket relationship between the two countries goes a long way, as the game was made popular in Afghanistan by refugees who spent years living in Pakistan when Soviet troops invaded their country in 1979.

In the last three years cricket has progressed in the war-ravaged country by leaps and bounds.

Afghanistan finished fifth in the World Cup qualifiers in 2009 to win the right to play one-day cricket and the following year they won the qualifying tournament to earn an opportunity to play in the World Twenty20 held in West Indies.

“With this opportunity we hope to build our team and next month we will feature in the World Twenty20 qualifiers and hope to win that again to play the main tournament,” said Stanikzai of the World Twenty20 event to be held in Sri Lanka in September-October this year.

“Afghanistan’s team is coming up very fast and we will take them very seriously,” said Khan, hoping his team carry on their good work from the 3-0 Test series win over England.

“This one-day against Afghanistan will give us an opportunity to switch to the one-day mode before the series against England,” said Khan of his team’s four-match series starting from February 13.

Pakistan have brought in all-rounders Shahid Afridi and Hammad Azam in the squad for the one-day matches.

Organisers in Sharjah hope a large number of Afghan and Pakistan expats will come to support their teams. (AFP)