Nepal have saved themselves some pride by registering their first win in four matches in the ICC World Cup Qualifier 2018.

Nepal have restored some pride, registering their first win in 4 matches in the ICC World Cup Qualifier 2018. After being put to field, they restricted Hong Kong to 153 in 48.2 overs. Nepal started well, but lost their way in the middle overs before recovering to win by 5 wickets. They lost Anil Sah in the last over of Powerplay. Paras Khadka, who has been in terrific form, fell for a mere 11 in the 17th over. At that stage the score was 58 for 3, which soon became 66 for 5. Then an unbroken 89-run stand between Sompal Kami (37*) and Rohit Kumar (48*) saw Nepal through. Aizaz Khan took the first 2 wickets but failed to win it for his team.

Earlier in the match, Nepal kept taking wickets at regular intervals, not allowing any batsmen to settle. Nazakat Khan held one side but missed his half century by 3 runs, falling to Lalit Rajbanshi in the 30th over. The Ehsans Khan and Nawaz frustrated Nepal towards the end before Karan KC rounded things off.

Sandeep Lamichhane starred for Nepal yet again, with exceptional figures 10-4-17-3. He bowled 52 dot balls and took the main wicket of Anshuman Rath.

The Nepal win has secured a place for Afghanistan in the Super Sixes. Nepal are out of the tournament with only 1 win as they ended at the second last in the points table.

Fifteen-year-old Rohit Kumar was named Man of the Match.

Man of the Match: Rohit Kumar. 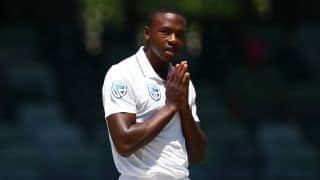